Golf tournaments, Italian music, the late Julia Childs’ cooking shows, and family photos—lots of family photos. These are among the contents of “memory boxes,” part of a revolutionary program called Behavior-Based Ergonomics Therapy, or BBET, for dementia patients being pioneered by a Wright State University biomedical engineering adjunct professor.

Govind Bharwani, Ph.D., developed the program for Alzheimer’s patients at the St. Leonard Franciscan Living Community in Centerville, Ohio. The program is spreading quickly. It is now being used at more than a dozen institutions in Ohio, Kentucky, and Kansas. And there is a six-month waiting list for those who want to implement some form of it.

“We are getting calls from around the world,” said Bharwani. “This is changing the way Alzheimer’s care will be done.”

Alzheimer’s disease is the most common form of dementia. Symptoms include memory loss, confusion, irritability, aggression, and withdrawal. The disease gets worse as it progresses, eventually leads to death, and there is no known cure. An estimated 5.4 million Americans are living with Alzheimer’s, which is the sixth-leading cause of death in the United States, according to the Alzheimer’s Association.

Alzheimer’s can place a great burden on caregivers. St. Leonard turned to Wright State and the College of Nursing and Health’s Nursing Institute of West Central Ohio for help with the physical wear on its staff and with Alzheimer’s patients, who would sometimes fall and injure themselves.

A therapy room at the St. Leonard facility

“The staff on the Alzheimer’s unit were always fighting fires; there was always a crisis; there was always somebody upset. Then it snowballs to other people,” said Bharwani’s daughter, Meena, who helps implement the therapy program and train the staff. “It’s hard to get control of the unit when everyone’s got so much stress.”

Enter her father, an ergonomics expert with 30 years’ experience. Ergonomics is the science of reducing physical and mental stress, which can afflict Alzheimer’s patients. Their loss of memory can make them agitated and combative, leading to behavior problems and the use of anti-psychotic medication.

“Our research has shown that boredom and disengagement in a long-term care facility can lead to these types of behaviors,” Bharwani said. “If they’re not engaged in a meaningful way, they run into emotional problems; that eventually leads to behavior problems and also causes a lot of stress on the caregivers.”

The question became how best to engage them.

Bharwani formed a team from Wright State, the Alzheimer’s Association, and St. Leonard’s—members with a total of 90 years’ practical experience. He also toured retirement and nursing facilities around the state that focused on Alzheimer’s care.

He found that Alzheimer’s residents are often put into group activities and sessions, which can engage some of them but not others. He also discovered that an array of different therapies was being used with the residents—from music therapy to aroma therapy to pet therapy. However, the therapies often called for specialists, which was expensive and impractical for the institutions and didn’t work for every resident.

So Bharwani decided to focus on the most effective therapies and then create therapy programs customized for each resident. He developed personality profiles through family histories and cognitive assessments. A computer software program would then spit out a therapy prescription that could be easily implemented by the nursing staff. It is believed to be the first non-pharmacological customized therapy program for Alzheimer’s patients in the nation.

The therapies include a music library of CDs that features hymns, oldies, television theme songs, Lawrence Welk, and other soothing sounds. Then there are videos of sports, travel, music sing-alongs, hobbies, comedies, cooking, and gardening. Called “comforting” libraries, these two therapies are designed to reduce cognitive stress.

A third therapy stimulates the brain through the use of games and puzzles. And the use of individual memory boxes constitutes the fourth leg of the program by providing reminiscent therapy. The residents’ families supply sentimental items in the memory boxes such as old photos and stuffed animals.

The memory boxes are a crucial component of the therapy. Dementia patients often cannot remember recent events, but retain pleasant experiences from the distant past and even remember details that an average person would likely have long forgotten. 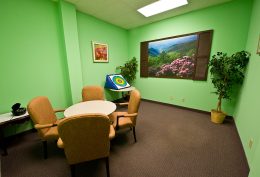 Another therapy room at the St. Leonard facility

“As the disease progresses, they begin to enjoy what they were many years ago,” Bharwani said. “You can put them in front of a mirror, and they would not recognize who the person is. But you give them a picture of what they were 20 or 30 years ago, and they’ll know exactly who it is.”

The therapy items are housed in a small room on the unit called the BBET Resource Center, which is open around the clock. The caregivers on the unit use an individualized
therapy action plan and often add to the items themselves if they see the need. One nurse once went out and bought a model train for a resident.

Laura Spain, a nursing assistant who has worked on the unit for 14 years, said the therapy items are  especially helpful in the middle of the night, when some residents get anxious and begin pacing. A 30- to 60-minute BBET therapy session is usually sufficient to keep a resident calm for up to four hours and they eat, sleep, and bathe in a relaxed manner.

“It just stops the behavior and stops the anxiety so they’re not hurting,” she said.

Nurses and other workers on the unit were initially skeptical of the therapy program and concerned it would add to their already-heavy workload. It was tested on five of the 18 residents during the pilot.

“In the first week, they saw such a change in their behavior that the staff was absolutely blown away,” Bharwani said.

When the Bharwanis’ program was implemented unit-wide, the moods and behaviors of residents dramatically improved. Within six months, resident falls had decreased by 40 percent and the use of behavior medicines—including anti-psychotic medication—had been reduced by up to 70 percent. Bharwani found himself presenting the results at conferences around the country.

“It’s all about individual engagement as opposed to medication,” said Tim Dressman, executive director of St. Leonard. “We’ve had tons of tours and attention from the outside, internationally. You use it, it works. I can’t say enough.”

Eric VanVlymen, executive director of the Alzheimer’s Association, Miami Valley Chapter, said the Bharwani program empowers the staff to help residents with dementia in an engineered and systematic way.

“That’s the beauty of it,” VanVlymen said. “I have seen a lot of different programs, and what makes this special is it thinks about the staff and how to reduce their stress and it thinks about people with dementia and how to reduce their stress through
those therapies. What I have really come to appreciate is Dr. Bharwani’s engineering mind, which addresses the problem from a different perspective.”

Since the first BBET Resource Center at St. Leonard was established in 2010, the program has expanded into their new memory support facility with a resource center in each of four wings. In late 2012, St. Leonard opened yet another center
to benefit the community—this one to help early-stage dementia patients who are being cared for in their homes, often by their children.

“It gives the caregivers a respite,” Bharwani said. “They are struggling. For them, it is a tremendous amount of stress.”

The BBET program has been honored with five national awards, including the 2011 Dorland Health Silver Crown Award for Alzheimer’s Care and the 2011 American Medical Directors Association Foundation Quality Improvement Award.

Bharwani grew up in New Delhi, India. His neighbors encouraged him to pursue engineering at a nearby engineering college, the Birla Institute of Technology & Science.

He obtained his mechanical engineering degree in India, master’s degrees in industrial engineering and business administration from Lehigh University in Pennsylvania, and his Ph.D. from Wright State in biomedical engineering.

Bharwani has now begun working on a book that—based on his research and experience—will serve as a practical guide to caring for people with dementia.

He said he initially approached the St. Leonard’s project like the engineer he is, focusing dispassionately on the results. Later it became an emotional experience, with Bharwani often getting hugs from grateful family members.