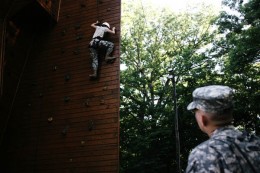 Wright State students can learn about the Army and ROTC at the Leader’s Training Course this summer.

It’s 29 days of running, climbing, marching, rappelling, rafting and bonding in the woods of Kentucky. When it’s over, the participants know what it takes to be a leader in the U.S. Army.

Wright State is one of the many colleges and universities that takes part in the Leader’s Training Course in Ft. Knox, Ky., at facilities that were once home to the mechanized cavalry headquarters.

“Besides showing them the basics about the Army, it’s also showing them camaraderie and teamwork,” said Lieutenant Colonel Maria Emery, a professor of military science and commander of the Army ROTC at Wright State. “It’s teaching them discipline.”

The Reserve Officers’ Training Corps (ROTC), a college-based program to train students to become commissioned officers of the armed forces, is designed as a four-year program. The Leader’s Training Course, or LTC, is a way to accelerate the first two years.

For students who take part in the course and are not in ROTC, there is no requirement that they join. 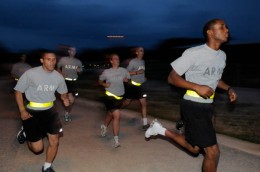 Wright State students who participate in the Leader’s Training Course have a chance to compete for scholarships.

Wright State typically sends three or four students to the LTC each year. The Wright State student attending this year’s first session is Gary Colson, a criminal-justice graduate from Dayton who will be seeking his master’s degree in applied behavioral science. The first of the seven sessions began June 12, with the final session starting July 14.

“There are still slots available,” said Emery. “And there is a good window where we can tell interested students about ROTC and prepare them for those 29 days.”

Students must be enrolled at Wright State, have no criminal background and get a physician’s approval to take part in the course. During the course, they have a chance to compete for scholarships. Of the roughly 1,400 students who attend, 200 will receive scholarships.

“You have to do well,” said Emery, who has taken part in the course herself. “They will do an order-of-merit list and take your GPA into account and how you perform at camp. All of the LTC candidates we’ve had attend in the last couple of years have received scholarships.”

The students spend the first few days learning the basics of the Army—drills, marching, ceremonies, customs and courtesies. They take a physical-fitness test that features pushups, situps and a timed two-mile run. They are also divided into different units where they learn teamwork and go through various training events such an obstacle course and simulated combat.

Students learn to rappel down a 50-foot tower, monkey across a rope bridge over a stream, upright a capsized raft and take part in combat water survival training.

“It’s not like basic training where there’s a drill sergeant in your face,” Emery said. “What they like about it is they just become a part of the team pretty quickly.”

Watch a video on LTC.

If you are interested in attending, contact the WSU Army ROTC Military Science Department at (937) 775-2581/2763 or verne.taylor@wright.edu.