Students in focus at the Center for Sensor Exploitation 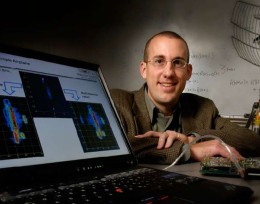 Through creative collaborations with defense and industrial partners, Wright State University’s Center for Sensor Exploitation has grown to include more than 100 personnel with revenue topping $1 million in 2013.

While student researchers are the center’s emphasis, post-docs, visiting scientists and faculty are well represented in its technically diverse and programmatically agile initiatives.

The center’s mission is mining actionable information from video, radar, infrared or acoustic sensors deployed in situations ranging from radar on UAV’s and sniffing chemical scents to water levels on the Great Lakes and detecting ultralights used to fly drugs across the Mexican border.

For example, aerial sensors can monitor highways and parking lots to determine traffic patterns, identify abnormalities and track the path of individual vehicles. The same information-gathering capability is used in battle zones to identify adversaries and their movements.

Under the direction of Brian Rigling, current projects include the Air Force Research Laboratory’s Center for Automatic Target Recognition and an NSF Industry/University Cooperative Research Center formed in collaboration with The Ohio State University and supported by AFRL, ARL, SAIC, Boeing, Raytheon and Etegent.

The Center for Sensor Exploitation has been successful in attracting researchers who develop new technologies important to the Air Force and local high-tech companies. With a diverse core of students and faculty from Electrical Engineering, Computer Science, Biomedical Engineering, Physics, Earth Sciences and the Wright State Research Institute, the Center is positively and significantly impacting the tech-sector economy of the region and the state.