A Dayton shelter for homeless youth was once her home, and Wright State University senior Quanita McRoberts can still be found there occasionally.

But now she’s there to give back—sharing her experiences and inspiring teens to pursue their dreams. 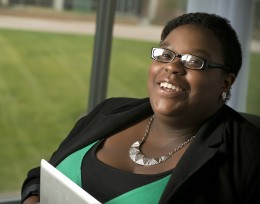 Quanita McRoberts gives back to the community through an internship at the United Way, by participating in advocacy organizations and helping organize fundraisers on the Wright State campus.

“Letting them know, I understand the place that you’re in,” she said, “but this phase of high school—teenage years that just seem awful—doesn’t last forever.”

Daybreak isn’t the only place McRoberts volunteers. Her community involvement includes interning with the United Way, participating in advocacy organizations and helping organize fundraisers on the Wright State campus.

“I get involved in whatever my heart is in,” she said

McRoberts is driven to help others because others have helped her. “I wouldn’t be right here if it wasn’t for the people who helped me along the way,” she said.

After her parents divorced when McRoberts was 8, her mother struggled with the demands of working and raising a child on her own. At the same time, McRoberts had difficulty understanding why her family’s financial situation had changed. During the start of her senior year at the Dayton Early College Academy, McRoberts moved out.

Because she was 17, she initially lived with an aunt and then her father. Four days after she turned 18, she went to Daybreak, initially staying in its shelter for three months. She then moved in to one of the organization’s apartments, where she lived until she enrolled at Wright State and lived on campus. She also received therapy and learned coping skills at Daybreak.

“I had to grow up really fast,” she said.

Through all the moves she worked three jobs and went to high school, remaining focused on getting to college.

“I knew I had to make a better situation for myself,” she said of her decision to move out. “I wanted to make sure that I was in a good place, especially going to college for my first year. And Daybreak did that.”

When she returns to Daybreak to talk to the young people there, McRoberts emphasizes that she made it through her teenage years and has been successful in college. She tells them: “‘I understand exactly how you’re feeling right now.’”

McRoberts has found other ways to give back to Daybreak. In a course on grant writing and fundraising, McRoberts wrote a grant proposal for the organization’s emergency shelter. Students in the class voted on which proposals they would support through a fundraiser. Daybreak was one of the organizations the class selected to support.

“I’m a strong believer in philanthropy,” she said. “You have your time, talent and treasure. And I don’t have the treasure quite yet, but I figured out a way to give [Daybreak] the treasure through the grant.”

McRoberts is majoring in liberal studies, with a minor in women’s studies, and working on a certificate in African American and Gender Experiences in Medicine.

She was attracted to the certificate program because she wanted to explore the different experiences African American males and females have with medicine. Eventually she wants to attend graduate school to study public health, focusing on mothers and children.

She’s always loved learning and says the breadth of her studies has opened her eyes to see things critically. She is also attracted to classes that help her better understand other people.

“I get to live a life of inclusion,” she said. “My experience with my major and my minor doesn’t stop in the classroom.”

Her extracurricular experiences at Wright State include being a member of the Nonprofit Leadership Alliance and the Feminist Majority Leadership Alliance. In the fall, she will write for a new newsletter from the Bolinga Black Cultural Resources Center.

She has participated in a winter coat, glove and hat drive, helped the Student Philanthropy Council organize two fundraisers and worked for two years for Wright State phonathons by calling alumni for support.

Volunteering gives you valuable experience and allows you to give back, she said, adding: “And you can put it on your resume.”

Working on fundraisers, she said, helps her connect what she learns in class and with her student organizations with real-world philanthropy.

She is spending her summer working at Wright State’s Center for Urban and Public Affairs and as an intern with United Way of the Greater Dayton Area. She was excited to get the internship because United Way focuses on income, education and health, all of which, she said, can be root causes of many overlooked issues that often lead to larger problems for individuals and communities.

McRoberts describes herself as an activist who has always had a passion for standing up for others. She has participated on a panel at the National Conference for Community and Justice teen summit and has attended Choice USA conferences at the University of Kansas and in Washington, D.C. She also volunteered for Barack Obama’s first presidential campaign in 2008 as a high school student.

“Ever since I can remember I’ve been an activist for people,” she said.

As a child, she stood up for friends and classmates who were being bullied.

“My activism comes from wanting to help others,” she said, “and also wanting to spread the knowledge that has made me feel good, that has given me so much reason to continue education and to do the things I love to do.”