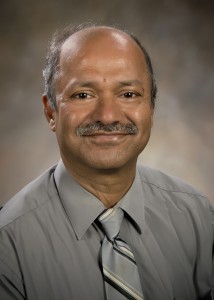 K. T. Arasu, Ph.D., is a world-class scholar who has led pioneering research projects but can still explain complex mathematical concepts to even the most baffled undergraduate.

“Despite his mastery of the material, Arasu was never condescending to students; therefore, we were not afraid to ask questions,” said current Ph.D. candidate Alex Gutman, who earned degrees from Wright State in 2007 and 2009. “The behind-the scenes stresses of academia never seemed to compromise his teaching.”

Wright State added Arasu to its faculty roster in 1983. He has since obtained more than $1.5 million in research funding, published more than 100 papers and technical reports, spoken at nearly 120 professional events, and devoted hundreds of hours over the last four summers to offering contemporary instruction to high school teachers.

Mathematicians, engineers, and statisticians from around the world have collaborated with Arasu, but most will credit him as the driving force behind important projects.

College of Science and Mathematics emeritus professor Dan Voss noted that Arasu has become a significant figure in the mathematics of communications engineering and signal processing research.

Arasu has provided extraordinary research opportunities to undergraduate and graduate students, supporting more than 100 of them, primarily through grants, since 1990.