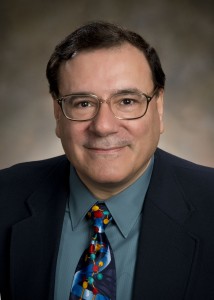 Julian Gomez-Cambronero, Ph.D., and his research team have accomplished much since the Boonshoft School of Medicine hired Cambronero in 1995. Recent events, however, would indicate the best could be yet to come.

Cambronero has published findings that may prove significant in cancer research. His team discovered a key protein that plays a critical role in the development of breast cancer tumors and the spread of the disease to the nearby lungs. The next goal is to utilize that knowledge to find a way to stop the metastasis of cancer cells before they begin to attack new tissues.

Even before this significant discovery, however, Cambronero had built a national and international reputation in medical research.

He has secured more than $6 million in research funding from the National Institutes of Health, the American Heart Association, and other agencies. He has published more than 90 peer-reviewed publications, presented more than 60 abstracts at various conferences, and reviews manuscripts for more than 20 scientific journals.

Students from Cambronero’s laboratory have also excelled. His graduate students have been awarded pre-doctoral and post-doctoral fellowships. Cambronero has trained postdoctoral fellows who have gone on to significant positions in academia and industry.

“Julian has achieved…scholarship accolades while providing extraordinary teaching to medical and graduate students and service within and outside Wright State University,” said Steven J. Berberich, Ph.D., Chair of the Department of Biochemistry and Molecular Biology.