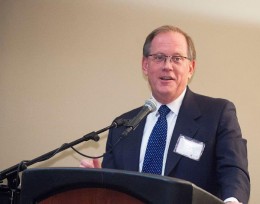 WSRI COO Dennis Andersh urged the Defense Forum audience to work together "like we’ve never worked together before" to grow the region's unmanned aerial systems industry.

Wright State University and the region are rich in talent and assets for developing unmanned aerial systems and is moving forward despite losing a bid to be a national UAS test site, the chief operating officer of the Wright State Research Institute told defense leaders.

Speaking to dozens of government, contracting and media officials at the Defense Forum on Feb. 27, Dennis Andersh said that while the test site would have been good for the region, it is not necessary for the UAS work that is being done here.

“The aerospace industry is pretty strong and robust across this region,” Andersh said. “There are few regions across this country that can compete with the intellectual horsepower here. You’ve got the entire food chain in our backyard.”

The forum, sponsored by the Dayton Business Journal and hosted by Wright State University, was held in the Wright State Nutter Center Berry Room. 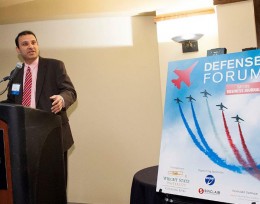 “Let’s take some risks and make things happen,” Narayanan said. “Wright State will be a great partner working with all of you to make this dream a reality.”

Unmanned aerial systems, or drones, are aircraft that are remotely controlled or controlled by on-board computers. They are usually deployed for military purposes, but are also used by police and fire departments and for pipeline surveillance and other civilian applications.

In December, the Federal Aviation Administration announced the selection of six national testing centers for unmanned aerial systems, and the Dayton region was not one of them despite making a strong effort to land the designation.

“We need to commit to the long term and remember that the ecosystem we are developing here has long legs and not lose our momentum or focus,” Andersh told the audience. “It’s going to require working together like we’ve never worked together before.”

Jack Blackhurst, director of the Air Force Research Laboratory’s Human Effectiveness Directorate, echoed Andersh’s comments, saying the loss of the test site would have no effect on AFRL’s UAS work.

Dick Honneywell, director of Ohio’s Unmanned Aerial Systems Center and Test Complex, said estimates project that nationwide the UAS industry will produce 100,000 jobs and grow from $6 billion a year to $94 billion in the next 10 years. And he said the micro air vehicle research being done at Wright State is “significant.”

In addition, Wright State and AFRL have developed a mobile, 18-wheel unmanned aerial vehicle test bed with a command-and-control center and equipment for assessing human performance.