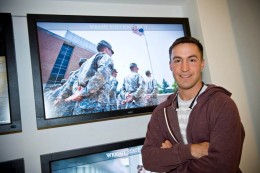 For American ROTC cadets, it is three days of marching, running, swimming, shooting and enduring other strenuous physical tests in a pressure cooker of competition.

Those who succeed win the coveted German Armed Forces Badge for Military Proficiency, which dates back to Frederick William I of Prussia. Cadets are allowed to wear the shiny, metal badge on their uniforms even after they are commissioned in the military.

“The time I really started appreciating it was seeing the other people who had it,” said Wright State ROTC cadet Keith Topper. “People kind of light up.”

Topper won a bronze version of the badge during the testing a few years ago. Last year, Wright State ROTC cadet Scott Presar returned from the testing with a gold badge.

The prestigious badge symbolizes the extensive annual test given to German soldiers. It resembles the U.S. combat and fitness tests and is administered by German liaison officers. Events include sprints, longer runs, combat swimming, the long jump, shooting competitions with a 9mm pistol and a march carrying about 35 pounds of additional weight.

Topper went through the three days of testing at Indiana University in Bloomington and Camp Atterbury in Indiana under the watchful eye of a German attaché.

“The hardest part was going three days in a row and performing under pressure,” said Topper. “You are sleeping in an unknown area with a bunch of people from different schools trying to all outperform one another.”

Topper graduated from Beavercreek High School, got a national scholarship from Army ROTC to attend Xavier University and graduated with a degree in political science and philosophy.

“I took a couple years of Arabic,” he said. “My goal was to go in to the diplomatic corps through the defense attaché program.”

Topper transferred to Wright State to complete Army ROTC while pursuing a graduate degree in international business. He also landed an internship at Wright-Patterson Air Force Base.

Topper said the Army has reinforced his drive to always do the best that he can.

“And it ties directly into the German Armed Forces Badge for Military Proficiency,” he said.