They sound like a rock band. But blue beetles are very much insects—and they may hold the secret to the fountain of youth. Working to unlock the mystery of these mysterious bugs is Wright State University researcher Dean Rider.

His genetics work takes place in the basement of Diggs Laboratory amid petri dishes and microscopes. 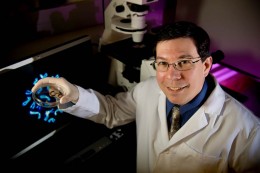 Wright State researcher Dean Rider wants to sequence the blue beetle’s DNA to learn why it lives so long.

“What I would like to do with this beetle is sequence its genome and see what’s inside there—try to find interesting things that tell us about its lifestyle, what might make it live that long,” said Rider, Ph.D., a research assistant professor in biochemistry and molecular biology.

Blue beetles, or Asbolus verrucosus, can live up to 17 years—four to five times longer than other beetles. They make their home in Mexico and the southwestern United States and can withstand the smoking, triple-digit temperatures of Death Valley and the Mojave Desert.

The beetle secretes a waxy substance that gives it a powder blue-colored covering to deflect the rays of the sun. It’s been reported that the insect can go without food for months and without water for up to a year.

Perhaps most interesting is that the blue beetle fakes its own death when faced with a predator.

Another mystery about the blue beetle is that it cannot be raised to an adult while in captivity.

“There is something we don’t understand in biology that prevents us from doing that,” Rider said. “Scientists can raise them to be very large larvae, but then they die.”

Rider, who grew up in Indiana, has had a lifelong interest in insects.

“I can’t remember a time when I didn’t care about bugs,” he said. “A neighbor kid and I used to crawl under people’s cars to get at the radiator and pull off the coolest bugs of the day and add those to our collection.”

He is using his expertise in genetics to investigate the blue beetle and its lifespan, which is something that is not well understood. However, it is known that lifespan is regulated by insulin-signaling pathways.

“We know that if you start to manipulate those in fruit flies or other insects, you can expand lifespan by 50 percent,” Rider said. “The blue beetle already lives four or five times longer than other beetles. So we’re going to be looking at those insulin-signaling pathways to see what’s there. It could reveal something related to lifespan.”

As part of his research, Rider would like to obtain a computer chip capable of sequencing up to 10 billion base pairs of the beetle’s DNA. To try to raise the $2,500 cost of that—Rider is conducting the research on his own time and dime—he has produced a video of the blue beetle to generate interest in the work.

“People can donate $1 or $2 and they know it’s going specifically to that project and they can watch the project evolve over time,” Rider said.