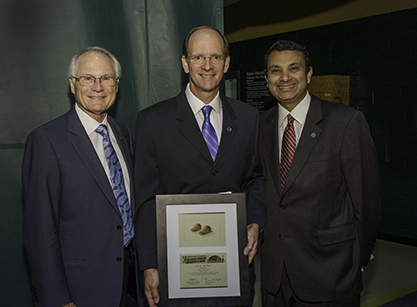 A peek at the new model of higher education, details of job-creation efforts surrounding military agencies, a new university aerospace leader, initiatives to help immigrants and tips for businesses to make more effective use of technology.

These were the highlights at Wright State University’s annual Regional Summit on Aug. 15. Educators, business leaders and elected officials from around the region attended, filling the McLin Gymnasium at the Wright State Nutter Center.

“I’m so proud that this Regional Summit has helped us accelerate our ability to work with you and do just that,” Hopkins told the audience.

The nine-member commission, which will include representatives from the Dayton region, will also partner with public and private ventures to ensure that jobs created by research stay in Ohio. In addition, the panel will help small businesses in Ohio work to obtain military contracts.

Hopkins presented Widener with a Wright State “Tip of the Hat” award to recognize him as a person who goes beyond the call of duty to serve other people, specifically for helping secure funding to create jobs and commercialization opportunities in the region.

During the summit, it was announced that Col. Cassie Barlow, former 88th Air Base Wing and Installation commander at Wright-Patterson Air Force Base, will join Wright State as executive director of the university’s Aerospace Professional Development Center.

Barlow called it an amazing opportunity to make a difference at a time of defense downsizing.

“This is a critical time to make the connection between defense and academia, help with that pipeline for what’s coming next,” she said. “What can we do to attract those people who are getting out of defense right now? Ohio can be a leader in this.”

Dayton City Commissioner Matt Joseph briefed the audience on the Welcome Dayton Plan, designed to engage new immigrants in strengthening the economy. He noted that two of every three immigrants in Dayton have advanced degrees and that the immigration population in the city jumped 40.3 percent between 2011 and 2012. 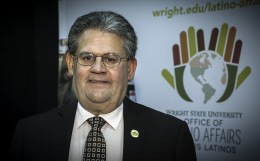 Participants broke into small groups to discuss the challenges facing business in technology and professional development. Their insights included: