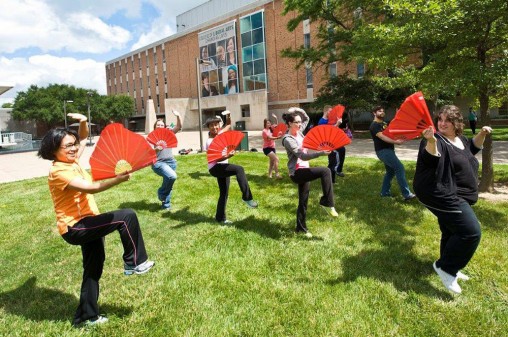 Wright State students on the Quad practice Tai Chi Fan, a form of Chinese dance/exercise, as part of the university’s Chinese studies program.

It’s a sound that would not have been heard at Wright State a few years ago — the whop-whop of red paper fans being whipped open as students on the Quad practice Tai Chi Fan, a form of Chinese dance/exercise.

It’s part of the university’s fast-growing Chinese language and studies program, fueled by students’ interest in learning Chinese to become interpreters, teaching English in China or landing jobs in a business world increasingly influenced by China.

“Students are smart; they know that not that many people can speak Chinese in this country,” said Maan Broadstock, a Chinese instructor. “Being able to speak Chinese really puts their resumes on the top of the pile.”

China is the world’s most spoken tongue. According to a survey by the Modern Language Association, enrollments in Chinese classes at U.S. colleges jumped 18 percent between 2006 and 2009.

“When college students think about their future, they see China,” said lecturer Haili Du, who came to the United States in 1984 from her native Shanghai. “I have students every year who go to China to teach English. China needs a lot of native speakers to teach English.”

Laura Hutchinson, an anthropology major from Fairborn, is among the students who are taking Chinese. She would like to teach in China.

“Plus I have friends who speak it, and I want to be able to talk to everybody,” she said.

The Chinese classes are even attracting non-Wright State students.

Myriah Neal-McKenzie, of Pittsburgh, is a student at Antioch College. She is taking Chinese at Wright State because it is not offered at Antioch. Alexander Menslage, a business major from Fairfax, Va., is learning Chinese to enhance his career.

“You need to speak a second language to really stay competitive in a business environment,” he said. “I figure Chinese has the most speakers on the planet, so it’s definitely a place to start.”

The size of China’s industrial and manufacturing sector now rivals that of the United States. And the Chinese economic juggernaut is being felt not far from Wright State.

Fuyao, the China-based auto glass manufacturer, plans to open its first North American manufacturing plant at the former General Motors facility in nearby Moraine. Fuyao Glass America Inc. has promised to hire 800 employees, generate an annual payroll of $32.5 million by the end of 2019 and stay at the Moraine facility for at least 18 years.

Du came to the United States in 1984 to better learn how to teach English. She joined the faculty at Wright State as an adjunct instructor in 2001.

Prior to that time, only an introductory Chinese course was offered at the university, once a year. Du began to develop more Chinese courses and became a full-time instructor in 2008.

Since then, Wright State has established a Chinese club, which adds another layer of understanding of the Chinese culture. Activities include such things as watching movies in Chinese and making decorative Chinese knots, a practice that dates back to ancient China.

Broadstock said learning the language also provides a lesson in Chinese culture. The symbol for good, for example, comes from the figure of a woman with a baby. “In that culture, they really respect women,” she said.

The Wright State students who take Chinese say parts of learning it can be challenging.

“They have sounds that we don’t have,” said Ashley Harshbarger, an International Studies major from Xenia who would like to be a translator. “The first week or so my jaw hurt from trying to make the sounds.”

Menslage says the subtle nuances in tone can be difficult to master. “If you don’t use the right syllable with the right tone, it’s a completely different word or it doesn’t make any sense,” he said.

That was echoed by Sarah Gilbert, an International Studies major from Huntsville, Mo., who wants to be an interpreter. “The number four is considered unlucky in China like the number 13 is here,” Gilbert said. “If you say the number four in a different tone, it means death. That’s what I struggle with most.”

Emily Smith, a criminal justice major from Huber Heights, says writing in Chinese is the toughest part for her. “Some characters mean different things depending on where they are placed in a sentence,” Smith said.

But Broadstock said many students find learning Chinese easier than they expected. “The grammar is so straightforward,” she said. “We don’t have conjugation. However, Chinese characters are hard.”

She said the best way to master Chinese is through a study-abroad program where it is spoken all the time.

Students Davin Faggs and Jennifer Dosch are going to China this fall to study Chinese and culture on full scholarships from the Dalian Institute of Science and Technology. Students Paula Sloas,  Max Stoker and Leemu Madison just graduated from Wright State and will be teaching English in Shiyan, China, at the Hubei University of Medicine.

Each fall at Wright State, students are paired up with Chinese students studying at Wright State so they can help each other with the language and with practical needs, such as shopping or getting a driver’s license.

Du said some of them have developed lasting friendships. One Wright State student was even invited to China by a Chinese student’s family to attend a family function.

“I like the culture a lot,” said Gilbert. “I want to hopefully go to China for a few years or so and get my career started.”