Science in the stacks 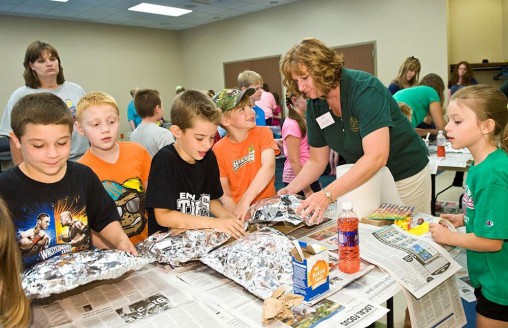 It’s early afternoon at the Clark County Public Library and things are about to erupt.

Forty children from local elementary and middle schools sit expectantly on the floor. They are taking part in a summer enrichment program — in this case a session titled “Exploring Earth Science through Explosions, Excavations and the Environment.”

Volcanoes are on the agenda.

The session at the library’s Enon branch is the brainchild of Wright State’s Stacey Hundley, Ph.D., lecturer in the College of Science and Mathematics’ Department of Earth and Environmental Sciences.

Hundley said she came up with the idea of the library program because many college students never got interested in science, but seem to have fond memories of taking part in library programs as young children.

“Hopefully, they will have a better understanding of geology when they leave,” Hundley said of the children. “My goal is to increase interest in science and maybe get some science majors down the road.”

During the session, the children learn how to make shield volcanoes — large low-slung structures that look like warrior’s shields lying on the ground. The children build their volcanoes with aluminum foil and cause them to erupt by pouring vinegar into the craters.

Pages of newspaper are scattered on the floor, awaiting the inevitable spills.

One young boy raises his hand. “Alright if we get a little messy?”

Another group of children is getting a lesson in mineralogy. “It’s the same mineral that pencils are made of. Isn’t that cool?”

At the end of the day, each child will take a fossil and volcano home with them.

Hundley said many of the Wright State students have observed teachers in the classroom, but may not have started their student teaching.

“So this gives them a one-on-one opportunity to work with the children,” she said.

Education student Nicole Neeley, who was manning the volcano station, said the experience helped her get accustomed to explaining science to young children.

“They get excited about things they learn,” said Neeley. “One girl came up to me and was telling me things she knew about vinegar. And they talk about different rocks they found. That’s really cool to see. They still are curious and want to learn.”

It appears the session had quite an impact on the children.

“I was walking my neighborhood when a young boy recognized me from the program and asked if I could identify a rock for him,” Hundley said.