She so loved the drums and practicing percussion that she would lose track of time and was sometimes late for her high school classes. So she kept the same hall pass at the ready in her binder and used it over and over.

Today, Elizabeth Procopio is a senior music major at Wright State University and fresh from an exclusive summer workshop in North Carolina, where she rubbed elbows with the likes of Grammy Award-winning country singer Mary Chapin Carpenter and Itzhak Perlman, the acclaimed Israeli-American violinist and conductor.

Procopio hopes to go on to graduate school and then make a career in a symphony orchestra. Her skills make that seem likely. 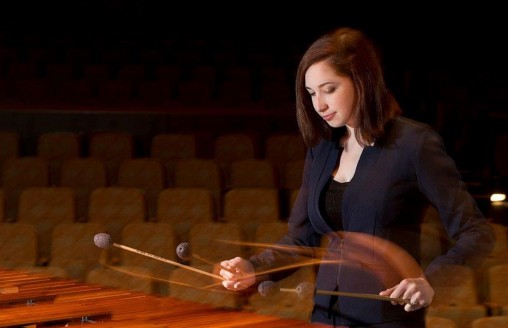 Wright State senior music major Elizabeth Procopio plans to pursue a career in a symphony orchestra as a percussionist.

For example, she can pull rich, ethereal tones from the marimba, a large xylophone-like instrument that sings when its wooden bars are kissed by mallets whose heads are softened by wool yarn. She favors the classical music of Tchaikovsky, Dvorak, Beethoven and Bach.

Procopio grew up in Foster, R.I., a rural village of fewer than 5,000 where she raised a few sheep on her family’s five-acre spread. It was the classic small town, where the village’s lone eating spot — Shady Acres Restaurant & Dairy — was known for the Shady Burger and a black raspberry sundae called The Purple Cow.

Procopio caught percussion fever when she was in the sixth grade. Her father, who works for the U.S. Food and Drug Administration, and her mother, who teaches sixth grade, were both into the arts. Her two sisters and brother all played musical instruments, including the trumpet, violin, viola and oboe.

Procopio said she wanted to take up a different instrument and was drawn to percussion, almost like it was preordained. 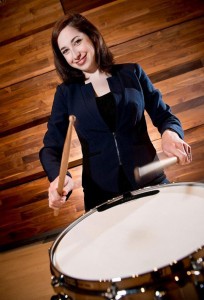 So at 10 years old, she began her percussion career with a practice drum pad and sticks. That quickly led to real drums. At one point, a timpani and xylophone took up residence in the family home.

Procopio acknowledges being a “band nerd” at Ponaganset High School who was constantly practicing, even during study periods.

Following graduation, she went to the University of Rhode Island, majoring in music. She later transferred to Wright State to study under Jerry Noble, director of percussion and a member of the Dayton Philharmonic. Frequently performing with the Cincinnati Symphony/Pops and the Fort Wayne Philharmonic, Noble has also performed as timpanist and percussionist with the Indianapolis Symphony.

“It’s absolutely incredible how much I’ve learned in the span of a year,” Procopio said. “Mr. Noble is also good at teaching us life skills like professionalism, skills we’re going to use our entire career. So I’ve learned a lot about myself and a lot about music.”