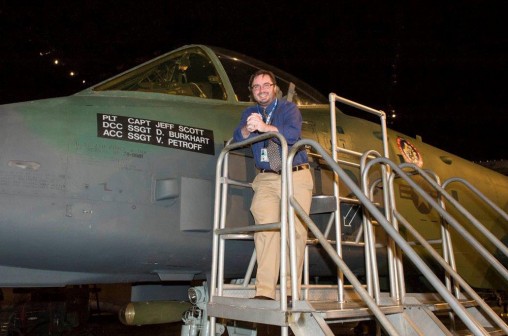 When he was a young boy, Jason Deibel would go to the airport with his grandfather on Saturday mornings. The two would spend hours watching airplanes take off and land.

In later years, Deibel would visit the National Museum of the United States Air Force, a sprawling treasure trove of airplanes, missiles and spacecraft that inspired him to study science.

Today, the Wright State physicist is helping the museum further develop its STEM programs as part of the university’s community outreach. He is bringing his expertise in physics and flight dynamics to museum classrooms and to the museum’s online lesson plans.

“I’ve spent some time going through the museum seeing which exhibits best lend themselves as examples for these scientific principles, where we could have some science moments,” Deibel said. “By the time I leave here, hopefully we’ve added some contribution to the overall STEM program.”

It is the world’s largest military aviation museum, attracting about 1 million visitors from around the world each year.

With more than 17 acres under roof, there are over 360 aerospace vehicles and missiles and thousands of artifacts on display. The museum is home to such aircraft as Bockscar, the B-29 bomber that dropped the atomic bomb on Nagasaki; and the Air Force One that took President Nixon to China and returned the body of President Kennedy following his assassination in Dallas.

Deibel, associate professor of physics and director of Undergraduate Research and Experiential Learning for the College of Science and Mathematics, said the community education effort involves “two huge partners” working together.
“We’re combining the use of resources where we’ve got this great venue,” he said. “Museum-goers are already learning about U.S. Air Force and military aviation history. Now we can enhance educational opportunities by adding a greater science understanding to that.”

Deibel began his work at the museum in July after the college signed a memorandum of understanding with the museum to collaborate on STEM activities. It is part of Deibel’s yearlong sabbatical for professional development.

“There is already a lot of K-through-12 programming at the museum,” he said. “What we’re trying to do is add more to the static content and gear a little bit more to the entire age spectrum. There is a great potential to engage every age with these ideas of science.”

Judith Wehn, chief of the museum’s Education Division, said bringing Deibel to the museum as part of a collaboration has been “terrific.”

“He’s a subject-matter expert who can really enhance what we’re doing with upper-level students,” she said. “We’re doing very well in our middle-school grades, but it’s that next piece of being able to do more with the physics and now a little bit more of aeronautical engineering dovetailing in with that.” 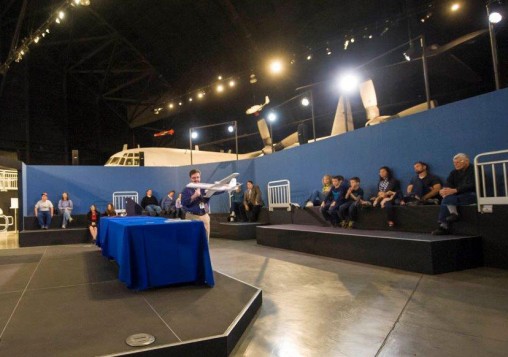 Jason Deibel teaching a class on lasers and the physics of flight in the STEM Learning Node at the National Museum of the United States Air Force.

Wehn said Deibel’s expertise will be especially valuable when the museum opens its fourth building, which will include research-and-development aircraft, the space gallery, global-reach transport aircraft and the presidential collection.

“The research-and-development section is really going to be enhanced by what he’s able to bring to the table,” she said.

Deibel earned his Ph.D. in applied physics from the University of Michigan. His research interests include ultrafast and terahertz spectroscopy and imaging and computational electromagnetics.

One of his passions at Wright State is teaching science courses to non-science majors.

“I’ve taught some basic physics courses where students know very little about the physics of light,” he said. “At the end of the course they understand how lasers work.”

So far, Deibel has taught classes to the public at the museum on lasers and the physics of flight. During one recent class in the museum’s STEM Learning Node he used Sir Isaac Newton’s three laws of motion to explain to about 20 people — young and old — how a plane stays in the air. Although his lecture was filled with talk of “thrust,” “acceleration,” “drag” and “vectors,” Deibel made the concepts easy to understand.

Deibel hopes to add to the online educational offering to provide more in-depth knowledge of the science of flight — “Where does lift come from? Why is the wing designed the way it is? How does something stay in orbit?”

In addition, Deibel is working on developing a Physics of Flight course that he would teach at Wright State.

Deibel says Wright State has given him the opportunity for professional development, something he could not have done with a full teaching load.

“And we have a pro-active dean and a pro-active department chair going out to seek out and establish these community relationships,” he said. “This is a nontraditional professional-development leave for somebody who normally does laser physics. But Wright State was very open-minded about this and encouraged it.”

“We are thrilled to be able to collaborate with Wright State and Dr. Deibel,” she said. “Dean Yi Li of the College of Science and Mathematics initiated the contact with the National Museum of the USAF. Dr. Deibel has been very generous in offering his expertise to expand the STEM education offerings of the national museum.”