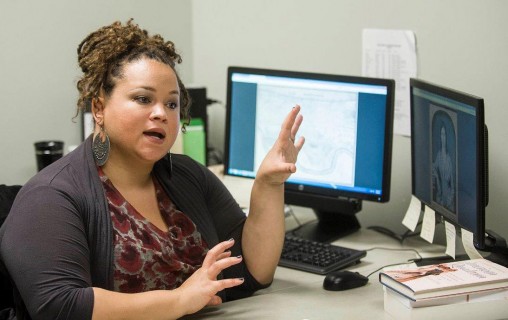 With the nuns of the Sisters of the Holy Family butterflying around her, Natasha McPherson used a pencil to painstakingly scrawl hundreds of names and histories down on paper at the copy machine-less mission in New Orleans.

Many of those records would be washed away when Hurricane Katrina battered and wounded the city, leaving more than 1,800 people dead and causing $108 billion in property damage.

But McPherson’s hand-copied records have survived and are part of a manuscript the Wright State University history professor has produced in a 10-year labor of love that reveals a previously untold history of Creole women.

“Getting this manuscript published is extremely important in preserving some of the history that might have been lost,” McPherson said. “My handwritten copy is the only thing left of some of these records.”

McPherson was born in the village of Lakenheath, England, site of a Royal Air Force base where her mother — a jet engine mechanic in the U.S. Air Force — was stationed. The family later moved to suburban Los Angeles, where McPherson attended an all-girls, Catholic high school.

After graduation, she enrolled at Spelman College, an all-women’s historically black school in Atlanta. She got interested in history after taking a course called The American South. 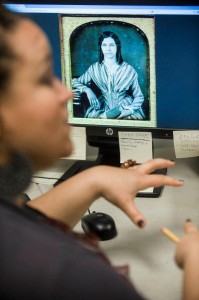 Natasha McPherson was drawn to Wright State because — like her — there are many first-generation college students at the university.

“I started learning how the South fits in to the American political system, the American imagination,” she said. “Everything made sense to me. All of a sudden it was that aha! moment.”

After getting her bachelor’s degree in American studies, McPherson got her master’s in U.S. history at Emory University.

She then pursued her Ph.D. in history, during which time she began conducting research on Creole women in New Orleans from the Haitian Revolution of 1791 to the Great Depression. The period includes the Jim Crow era of government-sanctioned racial oppression and segregation.

“This is a history that hasn’t been told,” McPherson said. “There is no cohesive history of Creole women after 1880, and that’s the center of my narrative.”

The Creole people are descended from the colonial settlers of Louisiana, especially those of French, Spanish, Native American and/or African descent.

“When all of those people come together in Louisiana under the political, social, economic conditions and they have children together, the children are considered Creole,” McPherson said.

She began her research in New Orleans, shifted to the National Archives in Washington, D.C., and then returned to New Orleans in 2006 as the city was just beginning to show signs of a pulse following Katrina.

To reconstruct the lives of the Creole women, McPherson combed through census, baptismal, marriage, funeral and other records at the courthouse, public library and even the Sisters of the Holy Family mission.

Because of the devastation, she struggled through lack of power, running water and convenient access to food. At the Archdiocese of New Orleans, going to the bathroom involved a trip down and up eight flights of stairs.

For most of their history, Creole women lived in the margins of two political classes — free and slaves. In the 19th century, they had more social freedom than African-Americans and even white women. But after the Emancipation Proclamation of 1863 freed the slaves, Creole women found themselves more strongly associated with African-Americans and thus more socially restricted.

McPherson discovered that many Creole women were able to preserve their status and previous privilege even without political representation by marrying white or Creole men and turning that into financial opportunity.

“Creole women have very shrewd business practices,” she said. “Even if they are given just a little bit of money, they will turn it into a business. If they own their own home, they rent out rooms in their house for income.”

Creole women would also form complex godparenting relationships with whites, who would sometime educate their children and later help them start businesses or buy homes.

McPherson used “Creole” as a category of analysis in the census records, identifying them through surname, occupation and other identifiers. She then created separate databases listing Creole women in the 19th century and in the decades starting in 1900, 1910, 1920 and 1930.

“I found some really interesting patterns,” she said. “While black women were often working as domestic servants, Creole women were able to stay home. That created a certain social separation from black women and an association with white women.”

McPherson feels like she has come to know many of the Creole women she researched. The records reveal a world of confrontations at social balls, public humiliations, court battles and even street fights.

“I feel committed to teaching students who are trying to better their situation, trying to create a legacy for their families,” she said.

McPherson is in the final stages of revising her manuscript for publication. She said the Creole women did little to document their lives.

“They left very few records themselves; there are few diaries,” she said. “My work is an attempt to give a voice to these women.”