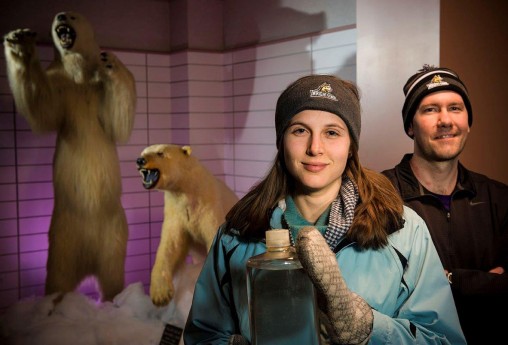 Graduate student Alison Agather will test for mercury levels in the Arctic Ocean as part of an international expedition. Chad Hammerschmidt, associate professor of earth and environmental sciences, is directing a National Science Foundation grant that Wright State received for the research.

Wright State University is going to the North Pole.

Graduate environmental science student Alison Agather will be part of an international polar expedition designed to take the pulse of the Arctic Ocean, measuring levels of mercury, lead, aluminum and other contaminants.

Wright State’s role in the expedition will be funded by a $180,000 grant from the National Science Foundation and directed by Chad Hammerschmidt, Ph.D., an associate professor of earth and environmental sciences in the College of Science and Mathematics and an authority on mercury contamination.

“It will be a grand adventure; it’s so unique to be able to go there,” said Hammerschmidt. “It’s an honor to get this funding because only the best proposals get it. To have Wright State included with the MITs and Florida States and Woods Holes is a pretty big deal. And we treat it that way.”

Hammerschmidt says one of the big scientific questions to be answered is why mercury concentrations in Arctic wildlife have increased by a factor of six to 10 in the past 150 years compared to only a factor of three in the United States.

“We can’t begin to address those questions unless we have some baseline data,” he said. “It’s likely that it’s very complicated, that it has to do with unique atmospheric conditions that exist in the Arctic seasonally as well as the Arctic Ocean being very unique compared to the other ocean basins in that it’s relatively shallow and has a lot of interaction with the continents.”

In June, Hammerschmidt and Agather will travel to Seattle and load their mercury analytical equipment and thousands of sample bottles aboard the Healy, a U.S. Coast Guard cutter and the nation’s newest polar-capable icebreaker. The NSF and the military are covering the costs of the ship, which can be as much as $60,000 a day on similarly sized U.S. research vessels. 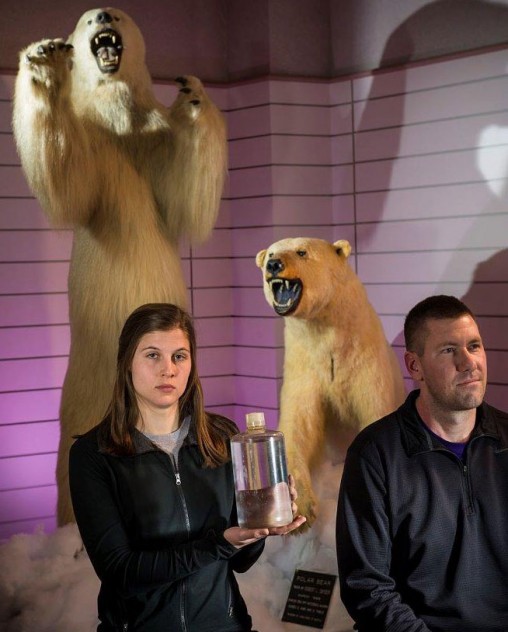 The expedition is part of Alison Agather’s Ph.D. research on mercury levels in sediment and seawater in the Arctic. Little such research has been done.

Two months later, Agather will board the Healy at Dutch Harbor, Alaska, perhaps best known as the home port for the crab fishermen of “The Deadliest Catch” television reality show.

The 140-person crew on the Healy will include 51 scientists from Wright State, MIT, Florida State, Hawaii, Miami and other U.S. universities. Only Wright State and the researchers from the University of California-Santa Cruz are sampling for mercury.

The trip is part of Agather’s Ph.D. research on mercury levels in sediment and seawater in the Arctic. Little such research has been done.

After leaving Dutch Harbor, the Healy will steam through the Aleutian Islands and into the Bering Sea, threading the needle between the United States and Russia and taking water and sediment samples the whole way.

After entering the Arctic Ocean, the ship will angle toward the North Pole, rendezvous with a group of Canadian scientists in the Beaufort Sea and begin encountering seasonal sea ice and then permanent sea ice that will have to be broken. At that point, the scientists will get off the ship, walk out onto the ice and drill holes to sample the ice and the water underneath.

Whether the Healy can get all the way to the North Pole will depend upon the thickness of the ice. The ship will have to turn back no later than Sept. 15 to avoid getting locked in the ice as winter begins to approach. If the scientists reach the pole, they intend to rendezvous with a group of German researchers who are hoping to take samples in Russian waters.

“I’m excited,” said Agather, who is from Minneapolis. “I’m a little nervous, but I’m looking forward to the experience. How many people get to say they went to the top of the world?”

During the trip, the scientists are certain to see the Northern Lights as well as Arctic wildlife, which includes polar bears, narwhals, seals, whales, reindeer, wolves and foxes.

Summer temperatures above the Arctic Circle can range from 14 to 50 degrees. The scientists will be outfitted with Mustang survival immersion suits, which have emergency inflation capability to protect them from falls into icy water.

They will also wear “bunny boots,” a nickname for Extreme Cold Vapor Barrier Boots used by the armed forces. The bulbous footwear retains warmth by sandwiching wool and felt insulation between two layers of rubber and are typically worn with heavy wool socks.

Agather will analyze the water samples while at sea. But she will bring the sediment and particles suspended in water back to Wright State for analysis.

“Alison will walk off the ship with a lot of information, but she will not have had enough time to interpret it until a year or two after the cruise because it is so much data,” said Hammerschmidt. “There are a couple thousand samples and each sample has five different parameters.”

Once the scientists return from the expedition and analyze their samples, they will all meet again.

“I’ll show what’s happening with mercury; other scientists will show what’s going on with lead and aluminum, for example,” Agather said. “Then we can compare and pool ideas about what might be happening in the Arctic.”