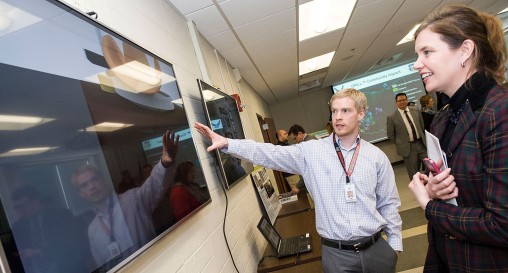 The March 20 demonstration was organized by the Air Force Research Laboratory, with major involvement by the Wright State Research Institute, which provides the technical systems expertise and has been integral to the university’s success in the technology’s conceptualization and implementation.

The Live, Virtual, Constructive technology combines live exercises with virtual reality to create a performance archive designed to increase the readiness of responders.

NCMR was chosen as the site of the demonstration because it has the expertise to design and execute live simulation exercise systems. In addition, it has the capacity and experience to host complex operational training and exercises upon which the technology can be used.

Jim Gruenberg, deputy director of NCMR, said NCMR’s Calamityville site provides the landscape, the expertise and the high-fidelity realism that enables researchers, testers and corporations to do important work for the nation.

“We provide this environment where live, intensive activity can happen that can be tracked and captured into the virtual environment,” Gruenberg said.

The Ohio Aerospace & Aviation Council serves as the voice of the industry to Ohio’s executive branch. Through a strong partnership with the state, the council works to strengthen Ohio’s global competitiveness in aerospace. Members of the council include officials from the State of Ohio, the Air Force, NASA, universities and private industry.

Members of the council received several briefings at NCMR and then were shown a live exercise, which was streamed via video and audio into the command center. Various virtual and constructive technologies were used to enhance the experience.

The technology can be used in many different scenarios — from building collapses to serious auto accidents. Last March, the technology was used at NCMR in an exercise designed to train medical responders.

During last year’s exercise, cameras and microphones captured the action. Pararescuers wore bioharnesses that monitored their vital signs, including heart and respiratory rates. All of the information and simulation rivered into the command center, where it was beamed to instructors from a wall of monitors and computer screens.

People who are off-site can also view the exercise through virtual connectivity.

The technology helps measure the performance of the participants, both during the exercise and afterwards through replays.

“After everything is all over, they can actually tap on a specific performance measure and all the audio, visual and virtual environments align,” Gruenberg said. “So they can actually see how well it was done.”

The March 20 demonstration also helped introduce members of the council to NCMR, which is the state’s alternate emergency operations center.

“If there is a serious enough emergency that they would have to abandon Columbus, then the entire operation of the state’s emergency management agency would come here,” said Gruenberg. “They would populate this entire building and run all of their operations from here.”

Gruenberg said the selection of NCMR as the host demonstrates the value and relevancy of academics.

“And it demonstrates the immense amount of technological capability that the university brings to bear to benefit the community,” he said.