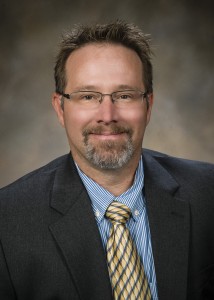 A Wright State University Boonshoft School of Medicine researcher and associate professor was part of a team of researchers that concluded that a history of traumatic brain injury (TBI) is associated with the development of neurological and psychiatric illnesses, including Alzheimer’s disease, Parkinson’s disease and depression.

The study was conducted in collaboration with members of the NFL Subcommittee on Former Players and Long-Term Effects of Brain and Spine Injury. Their study, “Association of traumatic brain injury with subsequent neurological and psychiatric disease: a meta-analysis,” was published in the Aug. 28 Journal of Neurosurgery, the official scientific journal of the American Association of Neurological Surgeons.

The research conducted was a collaborative study among scientists at Duke University, where Peterson was before joining the Wright State faculty in 2014, University of California-San Francisco, the Mayo Clinic and the University of North Carolina at Chapel Hill.

“The purpose of the meta-analysis study was to determine the association between prior mild traumatic brain injury and subsequent diagnosis — at least one year post-injury — of neurologic or psychiatric disease,” Peterson said.

Of more than 1,400 papers reviewed, 57 met the stringent criteria for inclusion. The researchers reviewed hundreds of articles to determine whether to include them in the meta-analysis study. That number was paired down to about 200 that were sent to Peterson to pull out the data that was needed for the actual analyses.

“Meta-analysis methodology is incredibly meticulous and time intensive, and at times seems never ending with the volume of literature that is vetted,” Peterson said. “This was a back-and-forth process for about a year until we were confident that we had the appropriate data sets for the many sub-analyses that were conducted.”

The research team found that a prior TBI was associated with 67 percent increased likelihood for any neurologic or psychiatric illness. A previous TBI was also associated with several individual diagnoses including Alzheimer’s disease, Parkinson’s disease, mild cognitive impairment, depression, mixed affective disorders and bipolar disorder.

“We found no evidence that multiple TBIs were associated with higher odds of disease than a single TBI,” Peterson said. “We concluded that a history of TBI, even one considered mild, is associated with the development of neurologic and psychiatric illness.”

This is the first study of its kind to quantify the association between a prior TBI and many different psychiatric and neurological diseases. Because of the high quality published studies that were included in the meta-analysis, the researchers were able to test for associations between a TBI and 14 different general neurological diseases in addition to specific diseases, including Alzheimer’s disease and Parkinson’s disease.

Peterson became involved with the project through his colleagues at the Duke Center for the Study of Aging and Human Development, where he is still a senior fellow. When the study began in 2013, Peterson was completing a National Cancer Institute funded postdoctoral fellowship in comparative effectiveness and biostatistics at Duke University. One of Peterson’s fellowship mentors, Carl F. Pieper, D.P.H., a biostatistician and director of the Computing and Statistics Lab at the center, was asked to conduct the statistical analysis by the project’s principal investigator, Kathleen A. Welsh-Bohmer, Ph.D., a neuropsychologist at Duke University.

“Dr. Pieper recommended that I lead the study’s analytical work, based on my training and strengths in biostatistical methodology,” said Peterson, who earned his doctorate in human movement science at University of North Carolina-Chapel Hill. Peterson also has completed postdoctoral studies in physical activity and public health at the University of South Carolina and comparative effectiveness and biostatistics at Duke University.

“During the early stages, the study was presented at an NFL subcommittee meeting and met with much enthusiasm, given the sports medicine community’s focus on concussions and the need for evidence of their long-lasting impact,” Peterson said.

He has had a general interest in TBI for a long time, mostly as a football and hockey fan. However, he was not exposed to that area of research until he started his doctoral work at UNC-Chapel Hill. When he was a student there, Kevin M. Guskiewicz, Ph.D., who is an international authority on concussion research, was the chair of the department of exercise and sport science. Many of Peterson’s fellow doctoral students trained under him.

“I did some analyses for a couple of fellow graduate students’ projects since I was often referred to as the stats guy in our student group,” said Peterson, who is grateful to Pieper for his biostatistical mentoring, which has spanned more than a decade and continues to this day. “I kept abreast of the field from a distance after finishing my doctoral studies. When I had an opportunity to be involved with a veritable who’s who in concussion research and clinical practice, I jumped at the chance without more than a second’s thought.”

Peterson is grateful for the opportunity to contribute to TBI research. With the media coverage of TBI in recent years, particularly in contact sports and in the military, Peterson credits the media for opening the dialogue.

“The medical and research community has been concerned about the assessment, treatment and downstream effects of concussions for decades, but we now have the broad spectrum of the military, parents of athletes playing on peewee fields and athletes playing on NFL fields on Sunday, who are concerned about the short and long-term ramifications of a TBI,” Peterson said. “All the stakeholders’ goals are more aligned now, which can only help in the advancement of assessment and treatment, and preferably prevention, of TBIs in the future.”