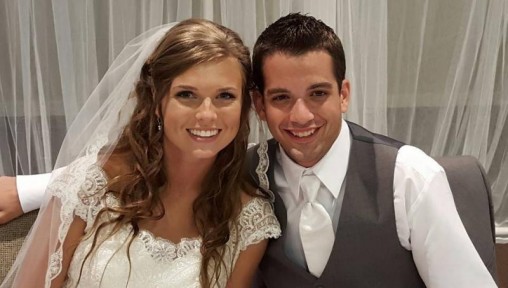 Wright State cross country runners Jessica and Kevin Swartz have competed together since high school and were married last summer.

The family that runs together stays together … because they have no other choice.

Fortunately for the Swartz family, discussions of that type are rare. They are still enjoying the first-year-of-marriage bliss and will cheer each other on during the Horizon League Championships Oct. 31 at the Elvin R. King Cross Country Course in Cedarville. Wright State is the host school for that event.

“I am excited it’s here,” Kevin Swartz said. “Cedarville is probably the course I have run the most, in high school and college. Plus, it’s close, so our families will be able to make it. It makes for a nice final hoorah.”

Kevin is a senior who will complete his eligibility this fall and hopes to graduate in May 2016 with a degree in athletic training. Jessica is a sophomore who also competes on the Wright State women’s track team.

Both admit becoming a married couple at 21 and 19 is not the norm for college student-athletes. But they have been friends since Jessica was a freshman on the London High School cross country team, when Kevin evoked executive privilege.

“I told the coach I needed all of the (runners’) phone numbers because I was team captain,” Kevin Swartz said. “After our first meet, I texted her for the first time: ‘Good race.’ We started talking a lot after that.”

The discussions that followed revealed more in common than running. They shared a strong Christian faith, an athlete’s work ethic and low-maintenance personalities that allowed their relationship to persevere even after Kevin left for college.

“We made an effort to see each other as often as we could, even if it was hard because of our schedules,” Jessica said. “That (separation) may have helped us in the long run because we valued our time together, and it made us realize exactly what we wanted to get out of this (relationship).”

“(Kevin) chose Wright State first; I am guessing that put us over the top,” Williamson said. “I think we both recruited her here.” 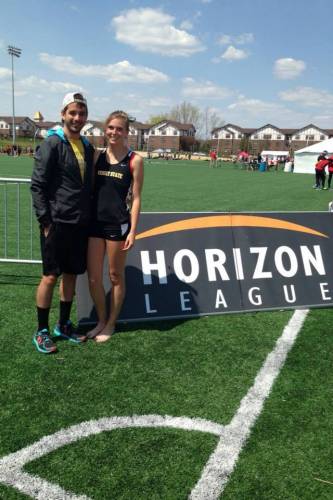 Kevin and Jessica Swartz and their teammates will compete in the Horizon League Cross Country Championships Oct. 31 at the Elvin R. King Cross Country Course in Cedarville.

The couple was engaged Nov. 8, 2014, and married July 11, 2015. Many of their teammates attended the wedding. Graduate student Ian Kallay, Kevin’s roommate for three years, was a groomsman and sophomore Kristen Sevier was a bridesmaid.

When they returned to school this fall, one might have expected interaction with their single teammates to be a bit awkward. Instead, it was like nothing had changed.

“If you didn’t already know, you wouldn’t even know they were dating, much less married,” Williamson said. “They do a good job of keeping it separate. Kevin is the nicest kid in the world — coachable, easygoing. You never see him in a bad mood. Jessica shows a little more emotion at certain times, but has always been very supportive of the entire team.”

“We were like that even in high school,” Jessica said. “We were never a big fan of couples who went off on their own. We focused on our workout. Kevin might have a ‘bro’ night and I will go hang out with my friends. Or, if he is at a football game, I will tell the girls to come over. But we do try to schedule times we can hang out with our friends so that nobody is stuck home alone.”

Jessica plans to continue to compete for the Raiders while completing her Bachelor of Science in Education in Sports Science. She can look forward to at least a little extra competitive advantage during those two remaining years.

“Hey, I will be married to an athletic trainer,” Jessica said. “He will be there to either answer my questions or tape me up. It worked out pretty nicely for me.”