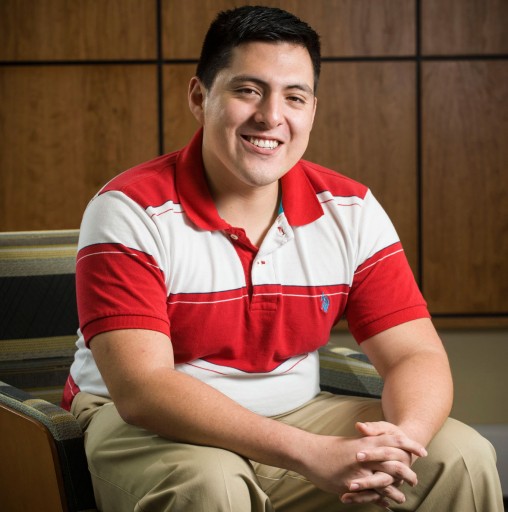 As an intern at Seepex, a manufacturing company in Enon, Ohio, Juda Medina researched how the business could expand into the Latin American market.

The project helped him turn the internship into a job at Seepex and now Medina’s putting that research into practice.

Medina’s internship at Seepex was supported by Wright State’s Ohio Means Internships and Co-op program. The state-funded program provides a 50 percent match to businesses that hire Wright State and other public university and community college interns.

He said he appreciated that the program allowed him to get actual job experience while he was still a student.

“Most importantly it helped me understand right out of college people don’t expect you to know everything,” he said. “The most important thing is that you’re willing to learn and show initiative — that’s what I really got out of it.”

Seepex offered Medina a job a month before he graduated in spring 2014 from Wright State University with a bachelor’s degree in international business.

The company is a good fit for Medina, who wants to focus his career on global business. Seepex, which manufactures progressive cavity pumps that move a variety of liquids, is headquartered in Germany with offices in the United States, China, Japan and Great Britain. The U.S. headquarters is located in Enon.

Medina works in the company’s Latin American division and works with distributors and customers, providing pricing quotes. Because the Latin American market is competitive and price sensitive, Medina regularly negotiates with customers, often over Skype.

“One minute I’ll be talking to someone in Chile, the next minute it’ll be somebody in Brazil, then you go back to Mexico,” he said.

Medina enjoys how the job allows him to meet people from other countries.

“I believe learning from all these different cultures also helps us out as a country to grow and understand. I’ve always taken that to heart — America being a melting pot,” he said.

Medina is part of that melting pot. He was born in Veracruz, Mexico, and moved to the United States with his parents when he was 1. The family moved around the country frequently, living in California, Florida, New Mexico and Ohio.

Medina’s father is a pastor and church planner who works with the local Hispanic population. His mother would work part-time as a teaching assistant while Medina and his younger brother and sister were growing up.

Moving around exposed Medina to different people and different cultures. That exposure also inspired him to study international business at Wright State. “It’s a passion I have,” he said.

As a student he worked full-time, managing various fast food restaurants and working for a bacon manufacturer and at a bank.

He managed all this while raising, with his wife, Norma, a 5-year-old son. The couple would juggle their work and class schedules, since Norma was working on her associate degree, with plans on transferring to Wright State. They are expecting their second child this fall.

His son motivated Medina to work hard to earn his degree. Medina also made sure he attended his son’s T-ball games and coached his YMCA soccer team.

“It keeps you focused and is an inspiration where there are difficult challenges in school and work,” he said. “I think it’s extra motivation.”