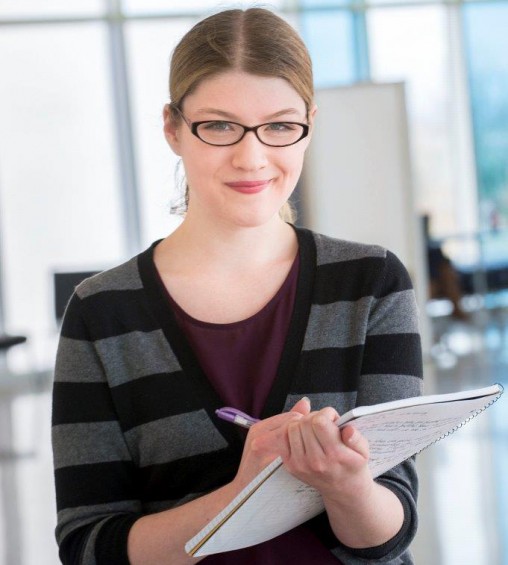 It’s a magical moment. It’s the moment when students who doubt whether they can actually write a college paper suddenly find the confidence.

Sophomore nursing student Chloe Schwartz, who works as a coach at the Writing Center in Wright State’s Student Success Center, has seen it time and again.

“My favorite thing about having a session with a student is when the student looks at me after they’ve been totally freaking out about the assignment and takes that deep breath of relief and says, ‘Oh, you know what? I CAN do this. It’s going to be OK,’” said Schwartz. “That’s what the Writing Center did for me, and that’s what I want to do for every single student.”

Schwartz came to the Writing Center for help when she was a freshman. In her English 1100 class, she remembers working so hard on her first assignment — a narrative — doing revision after revision.

“After we turned it in, the instructor said, ‘Alright, time for the hard stuff.’ I actually laughed out loud a little bit, but nobody else laughed,” Schwartz said. “He was serious.”

The hard stuff turned out to be text analysis, something Schwartz knew little about. So she turned to the Writing Center for help, where she met a writing coach.

“He taught me how to write a college paper in one hour. It was amazing,” she said. “I felt so welcomed, and it just gave me the confidence I needed to be able to talk to my instructor, to communicate myself, to feel like everything was going to be OK.”

Schwartz grew up in the Cincinnati suburb of Loveland. Her mother is an accountant; her father a psychologist. 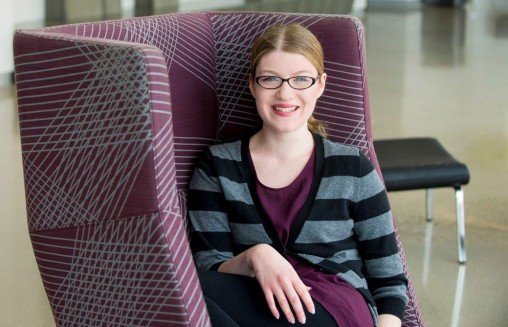 Chloe Schwartz was inspired by her stepfather, who is a nurse, to pursue the same career, saying she wanted to make a difference in others’ lives.

As a child, Schwartz was into art. She joined the Art Club at Loveland High School and helped beautify a highway retaining wall with her painting talent.

“We painted it with all of these things that represent Loveland,” she said. “I painted a big black silhouette of a horse because there are horses on the Loveland Bike Trail at any given time.”

However, Schwartz’ career path was inspired by her stepfather, who is a nurse.

“This person is such a caring individual and he made such a huge difference in my life,” she said. “I want to do that for other people.”

Schwartz’ decision to attend Wright State was a bit of fluke. When she was a junior in high school, she offered to drive a friend to Wright State for a campus tour. The tour guide thought Schwartz was the student and her friend the parent.

“So I got a free tour of Wright State,” Schwartz said. “And I just thought, ‘Wow, this place is so nice.’ It was really pretty. And the housing was really nice. And the food was really good. But mostly it was just the feel. I came here and felt like this was where I need to be.”

As a freshman, Schwartz used the Writing Center so much that her college-paper writing improved dramatically and she began scoring A’s on her writing assignments. She was recruited as a writing coach this semester, and her writing has gotten even stronger because of that.

She says a key to good writing is being able to organize one’s thoughts.

“A lot of people know what they want to say; they know how to communicate themselves and they can tell me,” she said. “But if that person is a visual person or thinks about things in circles like I do, it can be really difficult to develop those skills, extract information from your brain and put it into a logical order in a paper.”

Schwartz says writing has also enriched her personal life. She keeps several journals — some to share with friends, one for herself.

“My more personal diary has definitely helped me go back and reflect on ‘What was I thinking last year and how do I go about the same thing this year?’” she said. “I can connect those points and make sure that I’m getting something out of life.”