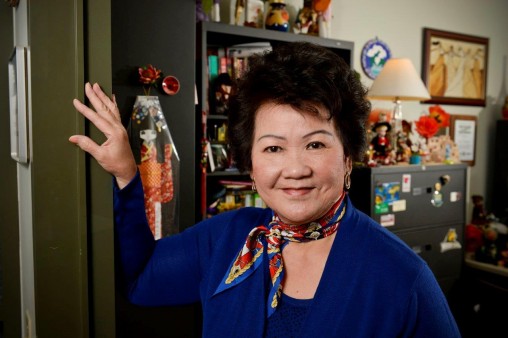 Mai Nguyen, director of the Asian and Native American Center, worked with ThinkTV to create two documentaries on local Vietnamese-Americans.

The lives of second-generation Vietnamese-Americans forced to navigate two cultures in the wake of their parents’ turbulent journey from their war-torn homeland will be the focus of a PBS documentary, thanks in part to the head of Wright State University’s Asian cultural center.

“Between Two Worlds: The Next Generation” is scheduled to air on ThinkTV in June. Mai Nguyen, founding director of Wright State’s Asian and Native American Center, helped develop and was featured in Part I, “Between Two Worlds,” which aired in April 2015.

In that film, Dayton-area Vietnamese immigrants described what it was like to make the painful decision to leave their homes in Vietnam, survive the rigors and dangers of the journey and overcome the challenges of making a new life in a strange land. An estimated 2 million people fled Vietnam between 1975 and 1995.

Part II examines the lives of seven second-generation Vietnamese-Americans as they were buffeted by two cultures and struggled to fit in to U.S. culture at a time when America wanted to forget about the Vietnam War and its aftermath. The second generation ranges in age from the teens to the 40s.

“The biggest fear of the first generation is that their kids will lose the mother tongue; they will lose knowledge of the Vietnamese heritage, the culture,” said Nguyen. “The kids grow up here in the mainstream, but when they return home from school they’re still Vietnamese. So there’s a conflict.”

Many parents are conservative, want their children to be 100 percent Vietnamese and work to keep that heritage alive.

“They do that by speaking Vietnamese at home,” she said. “It helps when the parents do not speak English.”

“The parents want them to have the best of what the parents could not have,” she said. “Their children didn’t experience the hardship, the ordeal when the parents escaped the country, but all of them understand that their parents struggled. The second generation has the luxury of inheriting the parents being here so they were able to choose the profession and what they wanted to do.”

In 1982, Nguyen moved from New York to Ohio after her husband got a job teaching economics at Wright State. She earned master’s degrees in industrial management counseling and student personnel in higher education at Wright State.

In 1986, she began working at Wright State as a research assistant in Academic Affairs and in 1997 became the founding director of the Asian and Native American Center.

Nguyen came up with the idea for the documentary film to educate the public about Asian-Americans and their history. She was supported by Kimberly Barrett, Wright State’s vice president for multicultural affairs and community engagement.

So Nguyen approached ThinkTV and worked with producer Richard Wonderling as well as Kitty Lensman and Gary Greenberg.

The immigrants were identified by Nguyen. Those interviewed ranged from government workers airlifted out of Vietnam to poor farmers who took their chances on leaky boats. One became a pediatric surgeon. One owns an engineering company. Others became business and property owners.

“When they sat down for their interviews, you could see in their eyes the pain, the pride and the determination that they’ve carried for 40 years,” he said. “Would these children, born and raised in America, have the same passion for Vietnam? In a melting pot, new combinations are created, but some things are lost. That’s the dynamic story arc that connects these two generations.”

Nguyen said some of the second-generation Vietnamese students she sees at Wright State say they know nothing about the Vietnam War because their parents don’t talk about it.

Nguyen said many members of the second generation have no animosity toward Vietnam’s Communist government and have visited Vietnam to connect with relatives and see things for themselves. Some have even moved to Vietnam to teach English or to take engineering or computer science jobs.