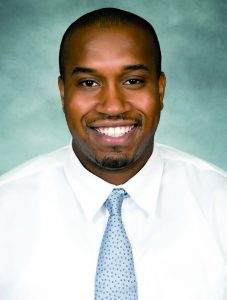 Kevin Purcell is a fourth-year medical student at the Wright State University Boonshoft School of Medicine.

The American Medical Association (AMA) Foundation recently announced that Kevin Purcell, a fourth-year medical student at the Wright State University Boonshoft School of Medicine, is one of 15 medical students nationwide to receive the 2016 Physicians of Tomorrow Award.

He is the fifth Boonshoft School of Medicine student to receive the award since 2012. He will receive a $10,000 tuition-assistance scholarship.

Recipients were nominated by their medical schools and chosen based upon academic achievement and financial need. The AMA foundation has awarded more than $61 million in scholarships to deserving medical students since 1950.

Born and raised in Brooklyn, New York, Purcell comes from a medical family. His father is a vascular surgeon and his mother is a registered nurse. In addition, his aunt is a pediatrician. He credits his parents and his aunt with encouraging him to pursue his dream of becoming a doctor.

“My aunt provided me with emotional support, love and affection. She always believed in me and encouraged me,” he said. “I remember growing up saying I wanted to be like my mom, dad and aunt because they impacted people’s lives.”

During his undergraduate years, he cofounded the mentorship/community service organization “Get Up & Get Out” and worked as a youth counselor, community volunteer and college host. The organization exposed at-risk youth in the New York City area to higher education and its benefits. He also was a workshop facilitator for the Kings Against Violence Initiative (KAVI), hospital/school-based anti-violence intervention program. In addition, he co-founded the Purple Boot Initiative (PBI) in the Harlem section of Manhattan. PBI offers minority youths reading classes, different forms of physical activity and crafts.

One of Purcell’s life goals is to start a minority mentorship program for young males in Brooklyn. He wants to teach them about the importance of education, professionalism and life skills. He is concerned about how few minorities are entering medicine and other fields such as engineering, law, technology and business.

“Mentoring minority and at-risk students is something that I have been passionate about for years,” Purcell said. “Mentorship plays a significant role in diversifying these different workforces. It is important to start mentoring folks from a young age so that we can mold and prepare them to seize an opportunity that arises.”

After he graduates from medical school in May 2017, Purcell plans to begin his residency in orthopaedic surgery. He is applying all over the country for residency programs. He is excited to see where he will be for the next five years of his life. Ultimately, he would like to practice in Brooklyn after completing his residency.

During his second year of medical school, Purcell was selected to serve as an adjunct member of the Boonshoft School of Medicine Admissions Committee. Along with the other members of the committee, he interviewed candidates and voted on applications.

“I found myself being an advocate for underrepresented minority students applying to medical school,” he said. “I used this opportunity to educate the admissions committee faculty members on the minority student experience in most colleges throughout the United States.”

Purcell participated in several student organizations during medical school. He traveled to Ghana on a medical mission trip as part of the Boonshoft School of Medicine’s International Education Program. He plans to travel to Cambodia on another medical mission trip in February 2017. He also participated in the American Medical Association Medical Student Section and the Student National Medical Association. In addition, he was inducted into the Gold Humanism Honor Society.

“The best part of my Boonshoft experience has been the supportive staff and faculty. I have been able to accomplish several things here at Boonshoft that would not have been possible without the unwavering support of our faculty,” Purcell said. “There have been numerous instances where staff and faculty have given their personal time outside of work hours to help me with a challenging concept, review an essay or give me words of encouragement. Coming to Boonshoft has been one of the best decisions that I have ever made.”