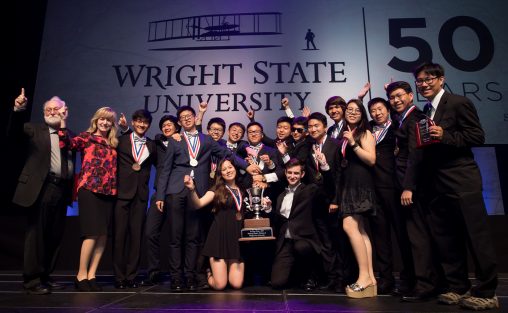 They arrived at Wright State University from the East Coast, the West Coast and everywhere in between, bringing their science skills and talents in hopes of being declared the best in the land.

About 2,000 middle and high school students battled it out May 20 in intensely competitive science and engineering projects — from Robot Arm and Hovercraft to Microbe Mission and Food Science — as part of the 2017 Science Olympiad National Tournament.

“These winning teams exemplify the best America has to offer in science, technology, engineering and math,” said Gerard Putz, Science Olympiad president and co-founder. “We are proud of their incredible achievements and know their schools and communities will welcome them home like champions.”

The students, educators and parents from all 50 states totaled more than 5,000 — pumping an estimated $1.7 million into the local economy.

The Science Olympiad kicked off at the Wright State Nutter Center the evening of May 19 with the Parade of States, an Olympics-like cavalcade of teams cheerleading their home states by wearing everything from red, white and blue patriot hats to ear-of-corn headgear to sponge wedges of cheese.

The next day, competition unfolded across campus, in classrooms, parking lots, the Student Union and the Student Success Center.

In the Health Sciences building, the Towers competition featured students who had constructed what looked like miniature oil derricks made of balsa wood. Judges would see how much weight the towers would support, taking most of them to the breaking point and filling the room with loud “cracks” as the towers fractured.

Students, coaches and parents looked on from theater seats in the auditorium.

“There are a lot of engineering designs that go into the tower,” said Shrivathsa Ballal, whose son was competing with the Liberal Arts and Science Academy from Austin, Texas.

Ballal said he was impressed with Wright State’s tunnel system and swelled with pride when he learned that several major donors with buildings and halls named after them hailed from his native India. 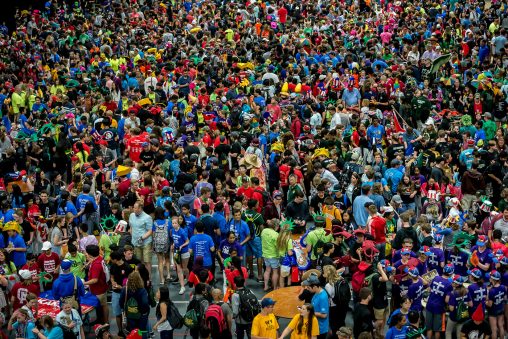 Science Olympiad brought more than 5,000 students, educators and parents from all 50 states to Wright State, pumping an estimated $1.7 million into the local economy.

David Walker, coach of the Austin team, said it has become especially difficult in Texas to get to the national tournament in recent years.

“So simply making it to this tournament is a reward in itself for these kids,” he said. “And they’re super pumped.”

Walker said the hardest thing about performing at Science Olympiad is making sure the team doesn’t bomb an event, which can dramatically lower the overall score.

“The greatest strength of this year’s team is its consistency,” he said.

Also taking part in the Towers competition was Tower Heights Middle School from Centerville, Ohio. The team also competed in the bottle rocket, hovercraft and other events. The other Ohio teams were from Mentor High School and Solon middle and high schools.

Tower Heights finished 17th in its division. Solon high and middle schools both finished third in their respective divisions. Mentor High School won a DuPont Team Enterprise Award, recognizing a breakout performance by a team at the National Tournament.

For the bright, young Science Olympiad students, the national tournament is a launching pad. Many will go on to top universities, where they will feed their natural curiosity, advance their research skills and sharpen tools that will shape the future of science. 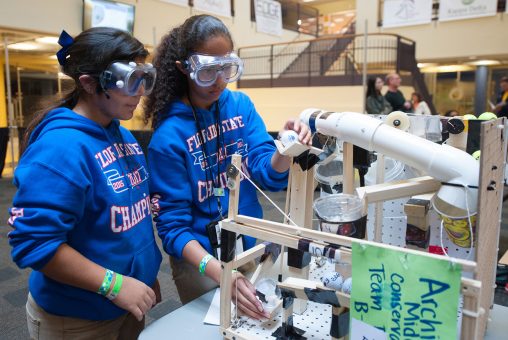 The school-based teams prepare and practice throughout the year, then compete in regional and state tournaments. The top 120 teams from state competitions advance to the national tournament. Rigorous hands-on and lab events led by experts from government agencies, top universities and Science Olympiad state chapters cover topics in physics, epidemiology, astronomy, chemistry, meteorology and engineering.