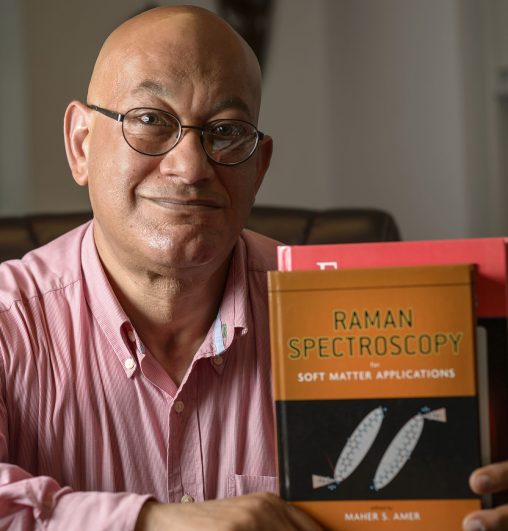 Maher Amer, a mechanical and materials engineering professor at Wright State, will research the next generation of solar cells during a Fulbright Scholarship at King Abdullah University of Science and Technology in Saudi Arabia. (Photo by Will Jones)

A new generation of solar cells in the form of tiny, flexible films that could be attached to windows, cars and even clothing is the focus of a prestigious research fellowship in Saudi Arabia won by Wright State University engineering professor Maher Amer.

Amer, a mechanical and materials engineering professor in the College of Engineering and Computer Science, was awarded a Fulbright U.S. Scholar Award for the upcoming academic year. He will be hosted by the King Abdullah University of Science and Technology, a private research university in Thuwal, Saudi Arabia, on the shores of the Red Sea.

“It is a great honor to have one of our faculty recognized with this prestigious award as it continues to build the prestige and reputation of our department, faculty and programs,” said Joseph Slater, chair of the Department of Mechanical and Materials Engineering.

Amer is no stranger to prestigious fellowships. He has previously received an Alexander von Humboldt Fellowship at the Max Planck Institute in Germany as well as a University of Cambridge Visiting Fellow award.

King Abdullah University of Science and Technology is considered by many to be the flagship university of the Middle East. It is home to state-of-the-art research and focuses on using engineering, science and technology to address global issues, including clean energy.

Amer will research the next generation of solar cells, which promise to result in thin, flexible, attachable nano-films designed to increase the efficiency of solar cells.

“We could turn anything into its own battery,” said Amer.

Before Amer leaves for Saudi Arabia in December, he will produce experimental data at Wright State. Then, at King Abdullah University, he and researchers there will try to duplicate the data using modeling and simulation. That should tell them in which direction they should go to advance the science.

The fellowship will also enable Amer to recruit students to Wright State and perhaps establish a student exchange between the two universities.

“We want to do something good for both countries,” he said.

Amer was born and raised in Alexandria, Egypt. His father served as a general with the Egyptian police forces, and his mother was a lawyer.

Amer earned his bachelor’s degree in civil engineering, a prestigious profession given that Egyptians built the pyramids and that civil engineers controlled irrigation in the arid country. But he was drawn to the more specialized materials engineering because it was an opportunity for him to delve deeper into the strength of materials.

After earning his master’s degree in materials science engineering, he came to the United States in 1992 to pursue his Ph.D., enrolling at Drexel University in Philadelphia on full scholarship.

Amer’s Ph.D. dissertation focused on Raman’s spectroscopy, a laser-based technique to measure stresses in composite materials. Funded by the Office of Naval Research, Amer and his research won a series of awards.

After earning his Ph.D. in materials science engineering in 1995, he stayed at Drexel for one year as a postdoctoral student and adjunct professor, then went to Rensselaer Polytechnic Institute in Troy, New York. He joined the faculty at Wright State in 1997.