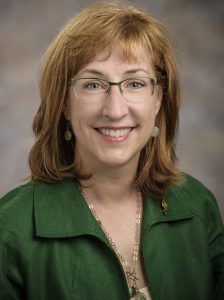 Nikki Rogers, assistant professor in the Department of Population and Public Health Sciences, has received the President’s Award for Faculty Excellence in Community Engagement not only for her work in Dayton, but also for her statewide and international work.

Rogers has worked with Communities Preventing Chronic Disease, an Ohio Department of Health grant that supports community efforts to prevent obesity and diabetes and promotes healthy lifestyles Montgomery County. She worked with the Montgomery County Diabetes Coalition to conduct prediabetes risk assessments, advocate for healthier food in grocery stores and educate the community and promote enrollment in local classes offering the National Diabetes Prevention Program, which can help prediabetics avoid progressing to diabetes through lifestyle change.

She has also worked with the Substance Abuse Resources and Disability Issues (SARDI) program. She served as a program evaluator for federally funded interventions in substance abuse, mental health and HIV risk targeting the underserved African-American communities in Dayton.

“This was a multiyear effort that was acknowledged to be a community success and reflected very positively on the commitment of Wright State University to Dayton and Montgomery County,” said Margaret Dunn, dean of the Boonshoft School of Medicine.

Rogers also co-chaired a three-day national conference at Wright State on sex, sexuality and disability. This Breaking Silences conference featured people with disabilities speaking on the theme of social justice and sexual stigma. She has served on the Ohio Lactation Consultant Association’s annual conference planning board, is the conference registrar and has helped the conference offer increased education on cultural factors affecting breastfeeding women in non-majority communities.

On the international level, Rogers has been active in public health in the Amhara district of Ethiopia, working to impact food source production on a community basis. She partnered with faculty from the University of Gondar to participate in community education and help people start and maintain household gardens.

During the project, Rogers was given the Ethiopian name “Fikir,” which means “love” in the Amaharic language.

“Rogers is an exemplary candidate for this award to recognize giving back to communities not only in Dayton and Montgomery County, but in Ohio and around the world,” Dunn said. “Her passion is to make a difference in people’s lives and her achievements as a Wright State University faculty member reflect those principles without question.”

Wright State became an independent institution in 1967 and spent the next 50 years growing into a leader in community service. In 2017, it celebrates its 50th anniversary as an independent public university, culminating with a special Homecoming celebration Sept. 29 through Oct. 1.