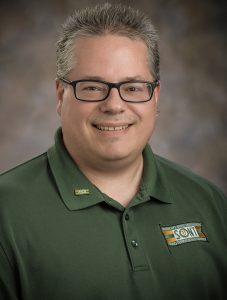 Eric Rowley’s service in organizations all around Wright State and the local community has earned him the Outstanding Non-Tenure Eligible (NTE) Faculty: Service award. Rowley, a lecturer of physics, fully embodies the Wright State mission statement to “Engage in Community Service.”

Rowley’s experience as a high school physics teacher gives him insight into coordinating courses for elementary and middle childhood education majors. He has enhanced the relationship between the departments of Teacher Education and Physics, ensuring that students pursuing a teaching degree have a valuable physics experience.

For the past six years, Rowley has been involved with the national Science Olympiad. He was the volunteer coordinator of the 2017 Science Olympiad National Tournament at Wright State. This involved recruiting and communicating with hundreds of volunteers for months leading up to and through the tournament. He also serves as a judge for events in Piqua and at The Ohio State University’s Science Olympiad Tournament.

“The Science Olympiad is a major draw for people to Wright State’s campus and must be handled professionally so as not to leave a bad impression. Rowley has done a great job in his roles with past tournaments,” said Douglas Leaman, dean of the College of Science and Mathematics.

Rowley has served on the College of Science and Mathematics Steering Committee for the past three years. This committee coordinates faculty meetings, holds elections and facilitates communication between the dean and the departments. He has also served as an ex-officio member of Undergraduate Petitions Committee and as a member of a successful search for a chemistry instructor.

Rowley’s service work extends beyond Wright State into the community around him. He volunteers as a teaching assistant for math in a fifth-grade classroom and coaches a middle school chess club. His volunteer work makes a good impression on younger students who see Rowley as a caring professional and Wright State University as a great school.