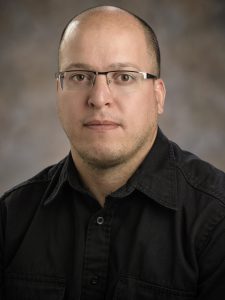 Labib Rouhana’s work in his externally funded Rouhana Lab has earned him the Early Career Achievement Award. He works with undergraduate students, graduate students and even a postdoctoral fellow.

Rouhana’s lab works primarily with the planarian flatworm — an organism that has remarkable powers of regeneration. For example, a tail can grow a new head, and a head can grow a new tail. Since the organisms live in freshwater, Rouhana’s findings can be useful to those studying freshwater ecology, as well as organismal evolution.

Rouhana, an assistant professor of biological sciences, is preparing a manuscript, “Girardia dorotocephala transcriptome sequence, assembly and validation through characterization of PIWI homologs,” with a student as the first author. In fact, several of his published works feature students as authors.

“I would not normally expect a pre-tenure researcher to invest in this kind of energy into undergraduate researchers,” said Douglas Leaman, dean of the College of Science and Mathematics. “The fact that he is doing joyfully and successfully is great.”

Within a year of Rouhana’s arrival at Wright State in 2013, he secured more than $400,000 in funding from the National Institutes of Health. David Goldstein, chair of the Department of Biological Sciences, said that while Rouhana was applying for funding, the market was extremely competitive, yet he received funding.

Rouhana’s work earned him an invitation to speak at the National Academy of Science Kavli Research Symposium, a small group of researchers in different fields. He then served on the organizing committee for the 2015 Indo-American Kavli Frontiers of Science Symposium.

In one of Rouhana’s classes, Current Literature in Regeneration Biology, students read current research in the field and critique the methods and findings in the papers. Rouhana encourages students to engage with the material and each other. Students love this class — saying it is “unlike any other.”