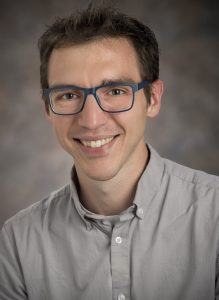 Thanks to his research, teaching and service at Wright State, Derek Doran has received an Early Career Achievement Award.

In the three years since joining Wright State, Doran contributed to winning over $1.5 million in externally funded research grants, including awards from the National Science Foundation and Air Force Research Labs. Nathan Klingbeil, dean of the College of Engineering and Computer Science, said he did not anticipate this much external funding.

“This level of funded research is exceedingly unusual for an assistant professor joining our faculty straight out of a Ph.D. program,” Klingbeil said.

Doran has taught undergraduate and graduate level classes, often rewriting or redesigning outdated course modules. His students highly regard his teaching ability, and his colleagues say Doran has exceeded expectations in his abilities and contributions as a teacher.

Doran has offered service to his college as a Faculty Recruitment Fellow, has been a chair of two department committees and participated in past open house events. He also serves on the program committee of many top machine learning, data mining and data semantics conferences.

“Dr. Derek Doran has truly been a model for early career achievement in all three legs of the stool,” Klingbeil said.

Though he is early in his career, Doran has had a significant impact on his students. Scott Duberstein, an undergraduate research assistant in the Web and Complex Systems lab, can attest to Doran’s teaching and mentorship abilities. During a research project, Duberstein faced health issues that prevented him from attending classes. Doran offered him a plan to cover all the content he missed.

“It is incredible to work with someone who is both driven and accommodating at once,” Duberstein said. “Dr. Doran truly personifies how faculty members should conduct themselves as mentors, teachers and scholars.”

Jace Robinson, a graduate assistant who is pursuing a master’s degree in computer science, said working and learning with Doran has been a turning point in his life. “Dr. Doran’s guidance allowed me to discover the joy of a career in research, pushing me to live a much happier and fulfilling life,” Robinson said.