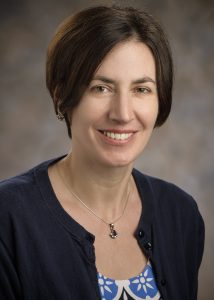 Valerie Stoker, associate professor in the Department of Religion, Philosophy and Classics, was named the Brage Golding Distinguished Professor of Research because she is a prolific scholar with a complex and interdisciplinary focus.

Stoker’s main area of research is medieval and early modern Hinduism. She recently published a monograph, “Polemics and Patronage in the City of Victory: Vyāsatīrtha, Hindu Sectarianism and the 16th Century Vijayanagara Court,” with the University of California Press in the well-respected South Asia across the Disciplines Series. It examines the relationship between religion and politics in 16th century South India, focusing on a specific Hindu sect known as the Mādhvas.

Researching the book required Stoker to travel to many important historic sites in India, including temples, monasteries, forts and palaces. While in India, she also conducted archival work in Sanskrit philosophical texts dating from the 16 century, studied regional language inscriptions and discussed Sanskrit texts with members of the Mādhva community.

In addition to her book, Stoker has published several articles on this sect’s history between the 13 and 17 centuries. Her current book project examines the community’s origins in the light of recent scholarship on new religious movements. She is also editing a volume in Bloomsbury Press’ Cultural Histories Series on Hinduism from 1500 to 1857.

Stoker also researches debates over religious expression in contemporary secular democracies. Her publications in this area, which have appeared in high-ranking journals such as the Journal of the American Academy of Religion and History of Religions, focus on minority religions’ advocacy work in places like Quebec. Here, her research draws largely on French sources.

Stoker has also received several prominent research grants from such prestigious institutions as the National Endowment for the Humanities, the Canadian Embassy, the American Academy of Religion and the American Institute for Indian Studies. Because the sources of funding for humanities scholars are scarce, the competition is fierce. Stoker’s success in this area is therefore a notable scholarly achievement.