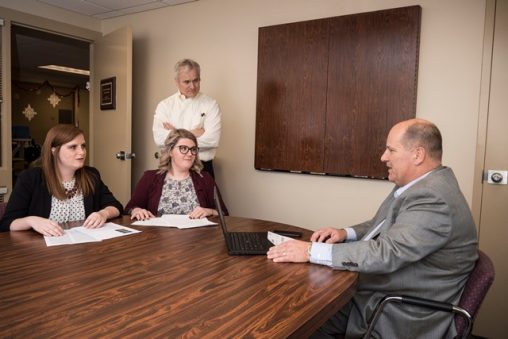 The real world of negotiation made an appearance at Wright State University when supply chain management students were paired with manufacturing executives and told to think on their feet and craft a high-stakes business deal.

Multiple 20-minute sessions occurred in conference rooms at the Raj Soin College of Business on Dec. 4 as part of mock purchasing negotiations with executives from Crown, a major manufacturer of lift trucks and components.

“The students were very well prepared,” said Ben Rhinehart, director – purchasing and trade compliance for Crown. “They had price alternatives and targets set up. Some played ‘good-cop-bad-cop.’”

In the mock negotiation scenario, the students wanted Crown to retrofit their fictional company’s beer trucks with an electronics system that tracks the trucks’ maintenance and other needs. The students sought an initial price quote from Crown, were given a fictional amount of money with instructions to get the price down as low as possible, and then met with Crown executives to hammer out a deal.

James Hamister, associate professor of supply chain management, said a key part of successful negotiation is to understand the cost position of your company as well as that of the company with which you are negotiating. Negotiators must first establish the outer limits of the price — prices beyond which are so high or so low that the deal won’t work and there is no room for negotiation.

Allison Brown, of Troy, and Courtney Phibbs, of Dayton, both senior supply chain management majors, teamed up to form one of the student negotiating teams.

Brown said she and Phibbs used negotiating tactics they had learned in class, proposing various payment terms and warranties to come up with a package acceptable to both sides.

“The toughest part is you don’t know what the seller is thinking,” said Phibbs. “What we’re offering — is that too low, too high?”

Brown, who is also majoring in marketing, said the experience of negotiating with professionals is something she can use after graduating.

“I think it was definitely beneficial,” added Phibbs, who currently works for Dayton Freight and would like a career in logistics. “You learn more doing that than just sitting in a classroom and hearing a lecture. It gives you a real-life experience, something you can use in the real world.”

Rhinehart teaches supply chain management at the Lake Campus as an adjunct and is on the department’s board of advisers. He said being a good negotiator doesn’t always mean getting a perfect deal every time.

“It’s more about the process of finding ways to do business between companies that creates innovation and value that other people didn’t think of,” he said. “Maybe you’re able to put something together that’s different than what your competitor can do with the same supplier.”

Hamister said the market for supply chain management graduates is strong, with job opportunities at regional companies such as Crown, Honda and Emerson Climate Technologies.

“But we really concentrate on Wright State because we have better retention with Wright State students,” he said.

Rhinehart said the mock negotiations were a way for the students to read the tea leaves of a situation and learn how to think on their feet — adapting and exploring until an acceptable agreement is reached.

“That’s what a savvy businessperson can do,” he said. “And I think it’s great to have the students not just go through a scripted deal with a number, but to actually have a positive and professional dynamic interaction and develop that business savvy.”