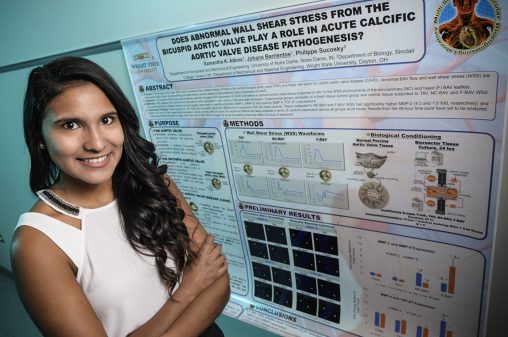 If you see her poster and hear her speak, it is no surprise to learn that Wright State University biology student Johana Barrientos took third place in a national poster competition among 115 undergraduate students from around the nation.

The poster explains her research on a complicated heart disease, but does it in a detailed, colorful and reader-friendly way. That impressed the judges at a national conference in Indianapolis sponsored by the Louis Stokes Alliance for Minority Participation.

“I was over the moon,” Barrientos said of her third-place finish with her poster titled “The Impact of Abnormal Wall Shear Stress in Acute Calcific Aortic Valve Disease Pathogenesis.” “It reassures me that I am doing something that is important and people are actually seeing it is important.”

Barrientos’ research is on calcific aortic valve disease, which occurs when calcium deposits form in the aorta and heart valves, restricting blood flow. It can result in the need to surgically replace the aorta, the main artery of the body that passes over the heart and supplies oxygenated blood to the circulatory system.

Barrientos is helping run simulations to try to determine how proteins are connected to the disease and whether they can be used to halt overproduction of the calcium deposits.

“There is really no cure for the disease right now, so we’re trying to figure out what’s causing it and what we can do to either slow down the progression or solve it,” she said.

Barrientos was born in El Salvador. She moved to Fort Lauderdale, Florida, with her family when she was 6 and later to Pensacola. She attended Washington High School in Pensacola, where she played volleyball, soccer and softball and was elected student body president her senior year.

Barrientos attributes her strong work ethic and initiative to her father, who paints, and her mother, who cleans houses.

“If you want something, you’ve got to do it yourself,” she says.

After graduating from high school in 2009, Barrientos took some time off in her formal education because she wasn’t sure what she wanted to do with her life.

“I was kind of soul-searching,” she said.

She got a job working as a technician for an ophthalmologist, was able to observe eye surgeries and was encouraged to pursue a career in the medical field.

“That’s how I fell in love with medicine,” she said.

Barrientos moved to Dayton and got her associate degree in biology from Sinclair College before enrolling at Wright State last August. She works as a lab assistant for Professor Philippe Sucosky in the Department of Mechanical and Materials Engineering.

She was invited by the Louis Stokes Alliance for Minority Participation to submit a poster and do a presentation in the national competition in Indianapolis in October.

The goal of the alliance is to assist universities and colleges in diversifying the nation’s science, technology, engineering and mathematics (STEM) workforce by increasing the number of STEM degrees awarded to populations historically underrepresented in those disciplines.

“I got to meet a lot of people doing research,” Barrientos said. “It was amazing.”

After graduating from Wright State, Barrientos would like to go to medical school. However, she is also interested in the Peace Corps.