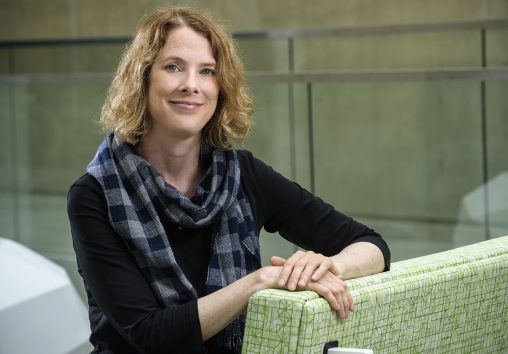 Caroline Hillard, associate professor of art and art history, will spend a year at the Harvard University Center for Renaissance Studies near Florence, Italy, researching the Etruscan influence on the Renaissance. (Photo by Erin Pence)

Caroline Hillard, associate professor of art and art history, has received a prestigious yearlong Harvard fellowship in Florence, Italy, to conduct research and write a book about the Etruscan influence on the Renaissance.

It is one of 15 such fellowships awarded worldwide each year by the Harvard University Center for Renaissance Studies, which is located at the Villa I Tatti, outside of Florence.

The villa belonged to Bernard Berenson, an important American art historian and connoisseur specializing in the Renaissance. He had a library and collection of paintings at his home, which was bequeathed to Harvard after his death along with the villa and surrounding properties.

“It’s got a stupendous library focused on Italian Renaissance studies,” said Hillard, who spent time at the library when she was working on her master’s and doctoral degrees. “There is a community of scholars who come and work on their projects at the center. I feel very lucky to be going back.”

Hillard plans to use the Berenson Library for source material in writing her book. She will also spend time at the National Library of Florence, which has a collection of rare books and manuscripts important to her research.

“And I’ll certainly be visiting archaeological sites and museums,” she said.

The Renaissance was a period of great cultural change and achievement that began in Florence during the 14th century and lasted until the 17th century, marking the transition between medieval and modern Europe. Italian Renaissance art influenced painting and sculpture for centuries afterwards, with artists such as Leonardo da Vinci, Michelangelo, Raphael, Botticelli and Titian.

Hillard said a component of the Renaissance was the rebirth of classical antiquity and that scholarship about the Renaissance largely centers on the revival of ancient Rome.

“One thing that a lot of people haven’t fully appreciated is that the city of Florence also had a foundation legend that involved the Etruscans,” she said. “I’m arguing that this Etruscan legacy also was driving the Renaissance and has been overlooked. I’m exploring the way it manifests in art and texts. So it brings a dimension of a major element of the Renaissance that hasn’t been fully appreciated.”

The Etruscans were one of the great Mediterranean civilizations, a wealthy and powerful people who flourished before the rise of Rome. They created elaborate burials and brought objects from daily life to the grave. Artistically, they are best known for their funerary paintings, sculptures, urns and jewelry.

Hillard is an expert on the Italian Renaissance. Last year she taught a seminar on Leonardo da Vinci and has an important article of a drawing da Vinci made of an Etruscan tomb that will soon be published.

Hillard grew up in Fairbanks, Alaska. She became interested in the Renaissance era while she was painting and studying art in high school. Then, as an undergraduate at the University of Alaska-Fairbanks, she traveled to Italy and fell in love with both the country and its art.

Hillard earned her master’s degree at Syracuse University and worked for the university in Florence as a field studies instructor. She earned her doctorate in art history at Washington University in St. Louis.

Hillard joined the faculty at Wright State in 2011. She teaches art history up to and including the 17th century, specializing in the Italian Renaissance. She also teaches Roman art with a segment on the Etruscans.