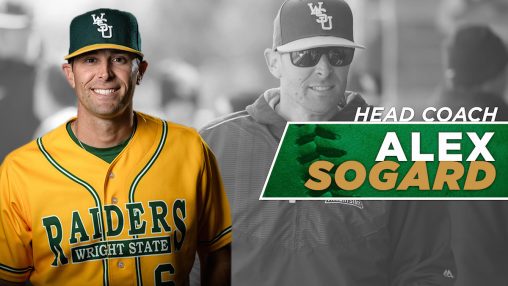 Alex Sogard, an assistant coach at Wright State for the last two years, was named the Raider’s head baseball coach. He replaces Jeff Mercer, who accepted the head coach position at Indiana University.

The North Carolina State graduate primarily worked with the pitchers but was involved in all aspects of the program, which finished the 2018 season 39-17 overall and 22-6 in the league, won regular season and tournament titles and went to the NCAA tournament. Sogard was also instrumental in helping Wright State to its first-ever top 100 recruiting class (87th) in 2018.

“Our baseball program is one of the top programs in the country, nationally known and respected — that is our mentality and our expectation level,” said Bob Grant, director of athletics. “Ron Nischwitz, Rob Cooper, Greg Lovelady and Jeff Mercer have all embraced this and have steered the program to this level. I have great confidence in Alex’s ability to continue this tradition of excellence. His high character, work ethic, knowledge of the game and experience of playing at a high level have benefited our program and our student-athletes tremendously the last two years.”

Three players were selected in the 2018 Major League Baseball draft, including two pitchers. Starting pitcher Ryan Weiss was selected in the fourth round by the Arizona Diamondbacks and 129th overall. Weiss posted a 9-2 record with one save and 92 strikeouts over 98 innings in 2018. He was named to the All-Horizon League First Team and Second Team All-Region. Starter Caleb Sampen was selected in the 20th round by the Los Angeles Dodgers. Sampen went 5-0 in 11 appearances with a 3.26 ERA and 33 strikeouts in 47.0 innings. Horizon League Player of the Year Gabe Snyder was taken in the 21st round by the Minnesota Twins.

“I’m excited and honored to be the head coach here at Wright State University,” Sogard said. “I look forward to continuing the legacy that was passed on to me. Coach Nischwitz, Coach Cooper, Coach Lovelady and Coach Mercer have created the foundation of success at Wright State, and I am grateful to follow in their footsteps. I’m very excited about this opportunity as we continue to elevate the tradition of the RaiderGang.”

In Sogard’s first season on Wright State’s staff in 2017, the Raiders reached new heights, receiving its first-ever top 25 ranking and finishing the season 38-21 over and 21-9 in the Horizon League. The Raider pitching staff compiled a 3.70 ERA and broke the all-time program single-season strikeout record with 423.

Raider baseball has been one of the most successful programs in the Midwest since 2006, advancing to six NCAA tournaments, including the regional finals in 2015 and 2016. During that stretch, Wright State won six Horizon League tournament titles and five regular season crowns.

Sogard was drafted by the Houston Astros in the 26th round of the 2010 MLB draft and played seven seasons of professional baseball. In his first full season with the Astros organization, he led the Single A Lexington Legends in strikeouts. He advanced as high as AAA and was selected to play in the Arizona Fall League in 2012 with the Mesa Solar Sox and 2013 with the Peoria Javelinas. He also played in the Arizona Diamondbacks and Baltimore Orioles organizations. Sogard worked as the pitching instructor for several elite camps, including the Pro 5 Academy in Raleigh, North Carolina.

The 30-year-old started his collegiate career at Oregon State, when the Beavers won back-to-back national championships in 2006 and 2007, before moving to North Carolina State for his final three collegiate seasons. In 2008, Sogard closed the regional championship game against South Carolina to win the Raleigh regional. His career also includes playing in the World Baseball Classic for Team Czech Republic in 2012 in Germany and 2016 in Mexico. His brother, Eric, is a member of the Milwaukee Brewers.

Sogard graduated from North Carolina State in 2010 with a bachelor’s science technology with a specialty in nutrition and exercise science.

He and his wife, Arlie, have two children, Fisher and Penny.