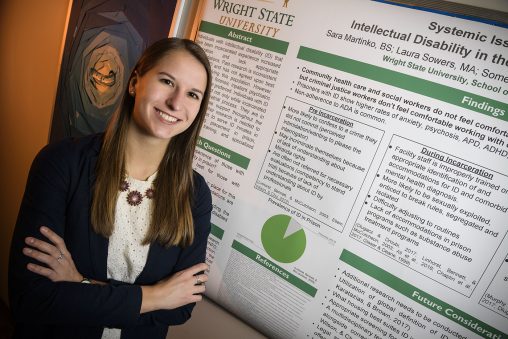 Sara Martinko, a graduate student in the School of Professional Psychology, will present her research on “Psychosocial Interventions for Family Caregivers of Stroke Survivors” at the American Psychological Association’s annual Rehabilitation Psychology Conference in Orlando. (Photo by Erin Pence)

When her mother suffered a stroke at age 51 that left her paralyzed on her left side, Sara Martinko, her father and sister suddenly became caregivers, a life-changing experience.

“We were pretty strong as a family going into it,” recalled Martinko, a graduate student at the Wright State University School of Professional Psychology.

But she said the family didn’t get the benefit of any outside resources or support. And it left her wondering how other families of stroke victims are able to handle the increased responsibility.

So Martinko selected that topic as part of a final project for her Rehab Psychology class, researched the issue and designed a poster titled “Psychosocial Interventions for Family Caregivers of Stroke Survivors.”

The poster has been accepted for presentation at the American Psychological Association’s 2019 annual Rehabilitation Psychology Conference in Orlando, Florida, in February.

Rehabilitation psychology focuses on the study and application of psychological knowledge and skills on behalf of people with disabilities and chronic health conditions. Its goal is to maximize health and welfare, independence and choice, functional abilities and social role participation across the lifespan.

Martinko believes presentation of her poster at the conference validates the importance of her research.

“It shows that they are interested in it and it’s something that’s relevant and impactful,” she said.

Martinko said families of stroke victims are often caught off guard because strokes can come suddenly without warning. And sometimes stroke victims are released from hospitals before they are really ready, putting more pressure on home caregivers instead of health professionals more equipped for it, she said.

Adding to the pressure is that families sometimes don’t feel capable of caring for stroke victims and the victims often feel they are a burden. There can also be financial pressures.

Martinko said family caregivers can benefit from interventions, which can include education, resources, support groups and individual and group therapy.

“It’s not as available as it should be,” said Martinko. “I would recommend implementing interventions like this; proactively too for families of people who are high-risk for stroke or while the victims are still in the hospital.”

Martinko grew up in Canfield, Ohio, a suburb of Youngstown. She became interested in psychology after taking a class in high school. She remembers her class watching the movie “Sybil,” about a woman with 16 distinct personalities, and found it “super interesting.”

After graduating from Canfield High School in 2013, Martinko enrolled at John Carroll University in Cleveland to study psychology. In 2017, she graduated with a bachelor’s degree in psychology with a concentration in forensic psychology and a minor in behavioral forensic science.

“I also liked my sociology and criminology classes, learning the mentality behind why people commit crimes,” she said. “Now I’m more interested in helping them while they are in prison or jail to recover or rehabilitate before they get released.”

Martinko was attracted to the School of Professional Psychology at Wright State because of its welcoming atmosphere. She loves how the school combines classroom learning with actual experience. She currently works as a psychology trainee at South Community health center and has about 20 clients.

“It’s great to have that class experience and knowledge, but also real-life experience sitting in a room with a client,” she said. “It prepares you really well.”

After graduation, Martinko hopes to work as a correctional psychologist in a prison or jail setting.

“The way we go about the criminal justice system is to lock people up for a set amount of time and set them free,” she said. “It’s not necessarily conducive to their development, and it’s not necessarily great for the community at large because they are coming out in the same situation.”