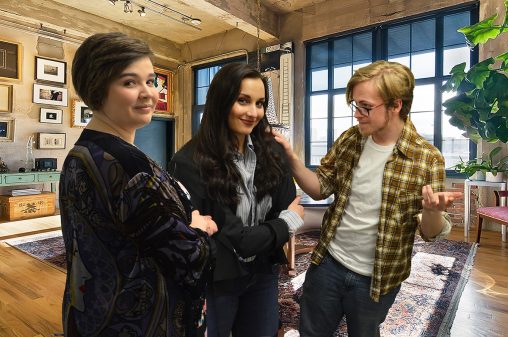 Wright State University Theatre continues its 2018–19 season with the hit musical “If/Then” from Feb. 22 to March 3 in the Herbst Theatre in the Creative Arts Center.

“If/Then” features music and lyrics by Tom Kitt and Brian Yorkey, who won a Pulitzer Prize and Tony Award for “Next to Normal.” “If/Then,” which opened on Broadway in March 2014, was nominated for Tony Awards for Best Original Score and Best Performance by a Leading Actress for Idina Menzel.

“If/Then” tells the story of Elizabeth, a newly divorced urban planner who moves back to New York City for a fresh start. Elizabeth meets her friends Kate and Lucas. Kate refers to Elizabeth as “Liz” and encourages her to seek out new experiences in the city. Lucas refers to Elizabeth as “Beth” and encourages her to seek out professional connections to help her career. The musical depicts the two possible paths Elizabeth’s life could take while exploring the themes of choice and fate.

Behind the scenes, “If/Then” is directed by Jamie Cordes (“Heathers: The Musical”), with musical direction by Melissa Yanchek. Musical dance numbers are choreographed by Megan Arseneau. Sets are designed by Carleigh Siebert, lighting by Gabe Reichert, costumes by Victoria Gifford, sound by James Dunlap, stage management by Sabrina Nichols and technical direction by Dylan Lackey.

The Wright State Theatre season concludes with “A Little Night Music” in the Festival Playhouse from March 21 to April 7.