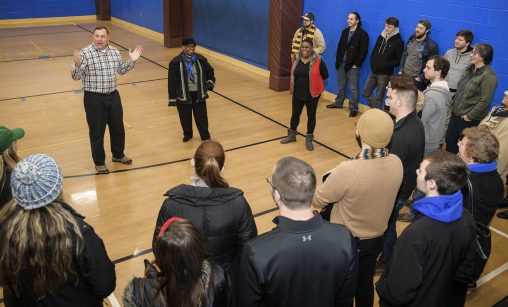 Wright State students taking the Agents of Change course met with the staff of the Dakota Center, which offers educational and recreational programs. (Photos by Chris Snyder)

More than 25 Wright State University students are gathered inside the Dakota Center, which has become a refuge and source of learning and recreation for many of the neighborhood’s children and seniors.

The students are part of a new Agents of Change course and Change the World initiative launched by the Wright State College of Liberal Arts. They are here to learn about the center and possibly join forces with its programs as a part of their class.

There is a perceptible pulse of enthusiasm among the students as they listen to a presentation by Michael Miller, the center’s executive director. He tells them that quality of life and lack of available resources are the biggest issues for residents in the neighborhood.

“We need to have people who are passionate about our mission,” Miller says.

Earlier, the students had been greeted in the Dayton City Commission chambers by Commissioner Matt Joseph.

“I’m really excited about the possibilities of this class,” he said. “I love that you want to be more involved and want to help us build solutions.”

The students tell Joseph that issues they are interested in helping with include poverty, youth development, sex education and the opioid epidemic.

Verletta Jackson, the city’s director of community engagement, tells the students the neighborhood engagement experience will be rewarding for them.

“It will be very impactful for our community,” she said. “We have been on fire for this.” 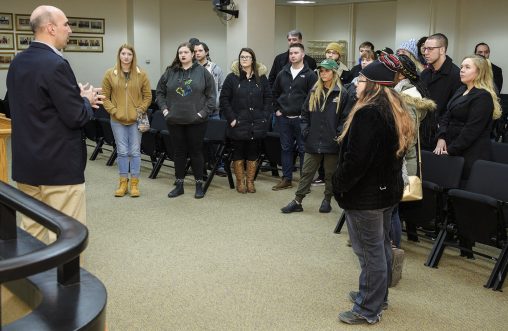 The students then board a charter bus and are driven around the downtown, where they see new housing and other recent improvements.

They then arrive at MacFarlane, one of the city’s 65 neighborhoods and home to the Dakota Center. They learn about the center’s educational and recreational programs, including plans to bring a vegetable garden back to life in the spring. The produce will go to the Gem City Market, a new neighborhood grocery store.

“It really helps if we can get young people here at the center,” said Sharon Mitchell, administrator of the center. “It motivates them.”

The community engagement course, which was launched spring semester, is taught by Laura Luehrmann, professor of political science and director of the Master of Arts Program in International and Comparative Politics, and Ashley Hall, assistant professor of English language and literatures and co-director of the New Media Incubator.

Interest in the course was high. Students had to fill out an interest form to get into the class, and the 25 slots filled up quickly, spilling over into a waiting list.

“I think people are hungry for connections,” said Luehrmann. “I think they’re hungry to be doing rather than just thinking or talking about it. It’s been inspiring to talk to the students.”

Luehrmann and Hall have formed numerous alliances for the class, including partnerships with Joseph and Jackson, Beavercreek Mayor Bob Stone, the Hall Hunger Initiative, the Greene County Chamber of Commerce and the Wright Brothers Institute, which collaborates with the Air Force Research Laboratory.

“We want to try to break down that real-world-versus-university framework,” said Luehrmann.

Hall said the course is firmly grounded in the humanities but also practiced in technology-rich workplaces.

“The first step in the design-thinking process is empathy and listening and building understanding between people,” said Hall. “It’s about building positive relationships and using that to guide your work processes.”

Hall said many of the problems taken on by the students are not easily solved, such as hunger.

“The course is really designed to create the framework for engagement,” she said. “What happens within that framework is the educational magic.”