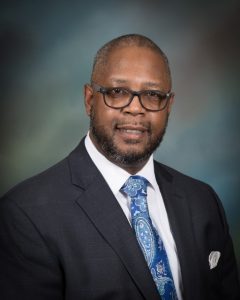 Ronnie Moreland is a master of public administration student at Wright State.

Moreland, who is pursuing his master’s degree in public administration, was named to the Top 10 list by Parity Inc., a nonprofit group that seeks greater participation and inclusion of African Americans in the development of policies.

He was honored during a Feb. 14 luncheon at Sinclair Community College’s Ponitz Center.

A Dayton native, Moreland began his public service work with The West Dayton Boys and Girls Club in the 1970s.

He is a past co-president of Leaders for Equality and Action in Dayton (LEAD), where he helped provide leadership to a network of diverse faith-based congregations to address and solve community-based problems.

Moreland was instrumental in assisting LEAD in securing the extension of public transportation to Greene County through a ruling from the U.S. Department of Transportation Civil Rights Division in 2013. The effort was captured in the documentary film “Free to Ride,” which was produced by the Kirwan Institute for Race and Ethnicity at The Ohio State University.

Following his service, Moreland was employed by the City of Dayton for 10 years and was a union steward with the American Federation of County, State and Municipal Employees Ohio Council 8.

Moreland, a deacon at Macedonia Missionary Baptist Church, is the co-convener of The Dayton Community Revitalization Network, a nonprofit whose mission is to improve the quality of life of West Dayton residents.