You hear them before you see them, tipped off by the familiar “pock-pock-pocking” sound. Then you round the corner and there they are — members of the Wright State University Table Tennis Club making magic with ping pong balls.

The players are in the Student Union gym furiously practicing for their appearance in the College Table Tennis National Championships in Greensboro, North Carolina, on April 12–14.

Getting into the championships is quite a feat considering that the club is in its infancy and that several of its members never even played competitive table tennis before coming to Wright State.

“I think it’s just huge,” said player Juan Olivari, a senior mechanical engineering student from Colombia. “We’re only in our second year and we were able to make it to nationals. It’s exciting.”

Members of the Wright State team are required to pay for the trip themselves, estimated at about $2,500. The team hopes that money from a bake sale and an online crowdfunding campaign will do the trick.

Olivari helped start the club along with Trevor Kramer, a junior from Springboro majoring in mechanical engineering with a minor in physics.

“We have a lot of people super passionate about playing,” said Kramer. “They are always down here practicing and playing together.” 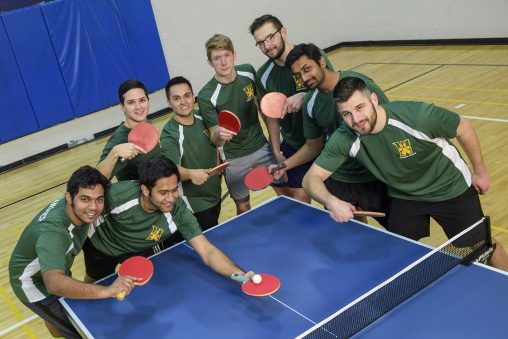 The Wright State Table Tennis Club is raising funds to pay for a trip to the College Table Tennis National Championships in April. (Video by Kris Sproles / photos by Chris Snyder)

One of the top players in the team’s division and the only Wright State student that will play in the singles competition at the nationals is Rajan Hirani, a junior majoring in statistics with an actuarial science concentration and a minor in business.

“Table tennis just gives me peace. It just gets me away from all the stress,” he said. “The sound when the ball hits the paddle, the sound makes me feel much more peaceful and comfortable. That’s my comfort zone.”

More than 250 players from 50 colleges and universities will compete in the 2019 iSET College Table Tennis National Championships in Greensboro.

“Table tennis is one of the world’s fastest racket games,” said Hirani. “So we have to be very focused.”

Kramer, who didn’t play competitive table tennis until he came to Wright State, said New York University has a very strong team, with three of its members on the U.S. national team.

“I kind of want to play them to see what it’s like to play at that level,” he said.

Kramer said the Wright State team has really improved and made a name for itself with the National Collegiate Table Tennis Association.

In a typical match between two teams, the top four players from each team play each other individually and must each win three out of five games. Each game is played to 11, but the winner has to win by at least two points. Ties — when each team has two winners — are broken by a final doubles match.

“Table tennis is a huge mental game,” said Kramer. “You’ve got to keep your calm and cool throughout the match.”

Table tennis etiquette calls for generally polite behavior, no talking between points and absolutely no wearing of white shirts, which can make a ping pong ball disappear from a player’s field of vision.

Injuries are not uncommon in the sport. Players sometime suffer shoulder and back injuries because of the twisting and rotation of the arms and torso. And there is an occasional knee injury.

“There is a lot of movement from side to side,” said Olivari. “You need to be able to move quite well, especially when you get to the higher levels.” 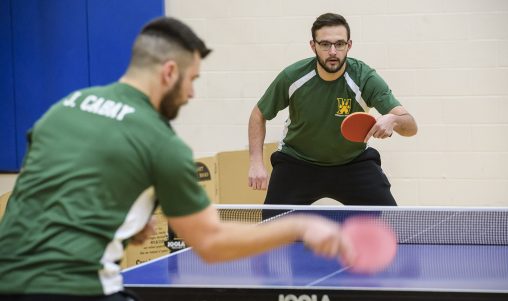 Club member Trevor Kramer during a practice in the Student Union gym.

Each player has his or her special customized paddle — laminated wood with pimpled rubber of varying thicknesses. A paddle can cost up to $600, but paddles used by the Wright State players average about $100.

The Wright State club has 13 members, some of whom are on the competitive team and others who just play for fun. Any Wright State student is welcomed to join the club, which usually practices on the tables in the Rec Commons in the Student Union.

Practices and matches are a symphony of sound and motion. The players crouch, lunge and attack with their paddles, firing the balls over the net with crazy topspin.

Hirani said table tennis is a release for him whenever he is under pressure, frustrated or buried in school or office work.