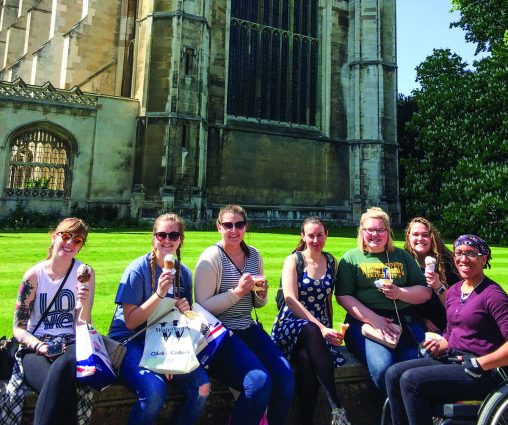 They follow Syrian refugees on Instagram and have Facebook friends in Finland, China and Mozambique. So it’s little wonder that college students who have seen foreign countries through social media are flocking to education abroad programs for a deeper experience.

“It’s an exciting time for education abroad. It really is,” said William Holmes, associate vice provost for international affairs. “The growth here at Wright State is unlike anything I have seen at my previous schools. It’s doubled in the last five years.”

Wright State is part of a national trend. The number of American students studying abroad continues to steadily increase, growing by 2.3% in the 2016–17 academic year compared to the previous year. A total of 332,727 students studied abroad for credit. That’s according to the annual Open Doors report by the Institute of International Education. The institute estimates that 10.9% of all undergraduate students study abroad at some point in their undergraduate careers.

More than 300 Wright State students currently participate in education abroad, double the number five years ago. Holmes said the increased numbers at Wright State are primarily due to faculty-led programs.

About half of Wright State education abroad students go on the faculty-led ambassador programs, which typically last a few weeks. The other half are students who directly enroll at an overseas university for an exchange or enroll in an affiliate-run study program for a semester.

Nationally, the five most popular countries students choose for study abroad are all in Europe — the United Kingdom, Italy, Spain, France and Germany. Wright State education abroad experiences include opportunities in approximately 60 countries that include programs in Italy, France, China, England, Poland and even the Amazon. A new experiential education abroad program in Nepal will launch next May for students studying kinesiology and health, making it a unique opportunity for students in this academic area. 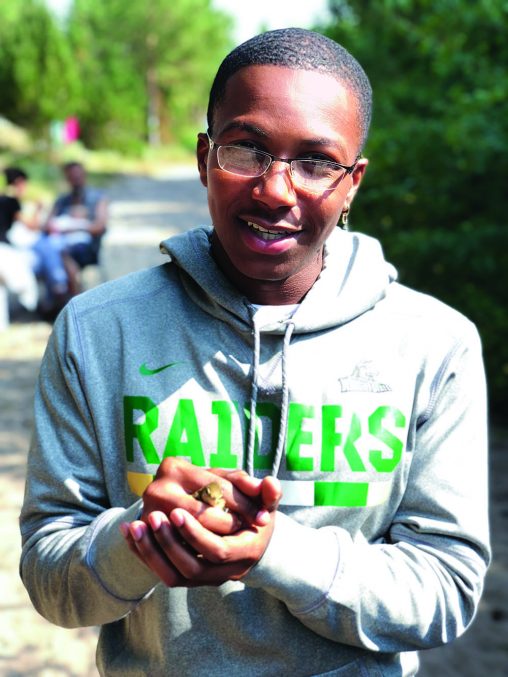 Joshua Hatch ’18 was one of several  psychology students who traveled to Poland  in 2018 to study the behavior of animals  in the wild and at a zoo.

Wright State has also begun giving out seed grants to help develop new education abroad programs. The university is currently trying to get programs started in Finland, Hungary, Belize and Kenya because of student demand. The university is also seeking out new department-to-department relationships and integrating education abroad programs with the curriculum so that students who go abroad can still graduate on time and receive financial aid.

“The education piece of international education is when we are actually teaching courses to people and we’re teaching those courses abroad,” said Holmes. “Education abroad is a key component to a modern education.”

“A lot of students come here and they’re timid, but when they study abroad they become more confident,” she said. “Studying abroad is a student success initiative.”

Wright State has also been focusing on education abroad trips for students with disabilities.

Earlier this year, the U.S. State Department named Wright State among institutions showing the greatest growth in overseas study by students with disabilities.

Thomas Webb, director of the Office of Disability Services, said that for the majority of students with disabilities, the thought of participating in an education abroad opportunity is often overwhelming and cost prohibitive given some of the additional support that may be needed.

In 2018, Webb helped lead a 10-day education abroad trip to England for students interested in rehabilitation services and disability studies. The students demonstrated their community accessibility evaluation skills by meticulously planning their itinerary for a day in London by checking with historical sites, restaurants and other stops to make sure they were fully wheelchair accessible. They learned that the Tower of London was only 20 percent accessible, so they switched gears and planned a stop at Parliament instead.
Jacob Nolin ’15 went to China on an education abroad trip in 2013 and was able to walk along the Great Wall of China.

“It was a new experience that showed me how an entire other country operates and how their people live,” said Nolin. “It also showed me that sometimes getting out of your comfort zone is the best thing to do. It made me more open-minded to trying new things.” 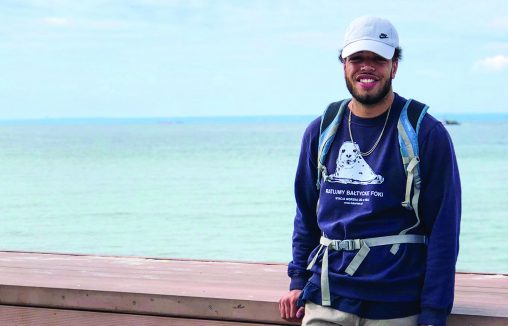 Jeremy Greene was among the psychology students who traveled to Poland in 2018 to study the behavior of animals.

Nolin, who graduated with a bachelor’s degree in English in 2015, so enjoyed the trip that he returned to China in 2016, working in Shenzhen as an international English teacher for 15 months. Today, he is a tutor with AmeriCorps, which engages volunteers in public service with the support of the federal government, foundations and corporations.

Kenny Burr ’14 went on a study abroad trip to London in 2014. “Some of my favorite experiences were trying out curry and Indian food, seeing all of the West End plays and musicals as part of the theater program class I took, as well as seeing all the museums and going to a rugby game,” he said.

Burr, who graduated from Wright State in 2014 with a degree in political science, currently serves on a variety of advisory boards advocating for people with disabilities. He is also the second vice chair of the New York State Disabilities Issues Caucus as well as the chair of The Disability Caucus of the Westchester Young Democrats in New York State.

“The study abroad trip made me want to fight even harder to promote change for people with disabilities, especially when it comes to accessible transportation options and making the world more accessible in general,” Burr said.

Nationally, the profile of education abroad students continues to become more racially and ethnically diverse. About 29.2% of students who studied abroad in 2016–17 were non-white compared to 18.1% a decade earlier.

In 2018, Wright State psychology students traveled to Poland to study the behavior of animals in the wild and at a zoo. They spent three weeks studying the migration patterns of birds, the behaviors of apes and the reactions of seals to different stimuli.

The trip presented a life-changing opportunity for psychology majors Joshua Hatch ’18 and Jeremy Greene, the first African American male students to participate in the trip.

“There are people who never even get to travel outside their city or state, let alone the country. That was amazing to me,” he said. “If I could enable more people to have the opportunity, I would.”

Holmes said studying abroad can be a life-changing experience, an opportunity to learn about oneself as well as become better prepared for the job market. Data suggest that college graduates who study abroad earn about $1 million more in their careers than those who don’t.

“A recent survey found about 40% of companies missed business opportunities because they lacked internationally competent staff,” said Holmes. “With 95% of the world’s consumers outside the U.S., this makes education abroad an important educational imperative for Wright State.”

Emma Peterson ’19 is an example of someone who has taken full advantage of the university’s education abroad opportunities. The international studies and Spanish major, who graduated this spring, studied abroad in Costa Rica, Chile, France and China. Most recently, she began a Fulbright fellowship in Taiwan as an English teaching assistant.

The Fulbright U.S. Student Program is the largest U.S. exchange program offering opportunities for students and young professionals to undertake international graduate study, advanced research, university teaching and primary and secondary school teaching worldwide. It operates in more than 140 countries. Students are selected based on their academic record, language preparation and the quality of their proposed community engagement project in their host country. Fulbright scholars meet, work, live with and learn from the people of the host country, sharing daily experiences. Through engagement in the community, the students interact with their hosts on a one-to-one basis to promote mutual understanding. 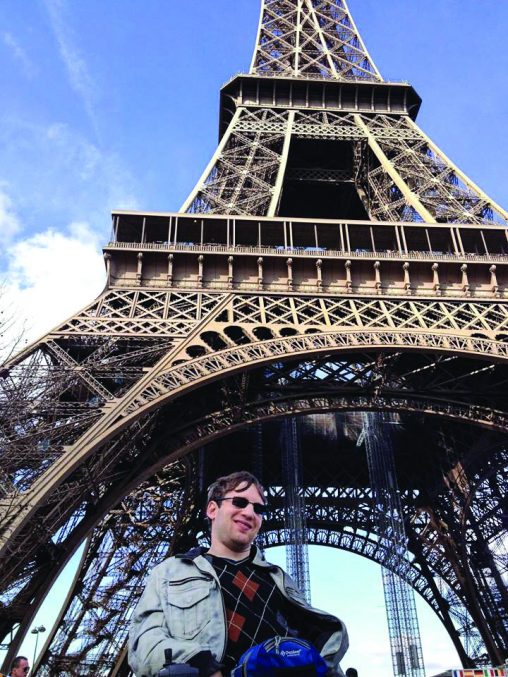 Kenny Burr ’14 under the Eiffel Tower on his study abroad trip to Paris in 2014.

“I loved Chengdu because it had a lot of traditional Chinese culture,” said Peterson. “Teahouses are very popular. Elderly people would go to the teahouses and just sit and drink tea all afternoon while playing mahjong. And the parks are lively. Parkgoers dance, juggle, and practice the martial art of tai chi.”

“They taught [us] how to do traditional Chinese paper cutting, and we taught them how to make mashed potatoes,” she said. “It was a lot of fun.”

Holmes said studying abroad is a “growing thing,” thanks in part to social media.

“You have students who are Facebook friends with people all around the world,” said Holmes. “They are following each other moment to moment to moment. There is greater connection now than there ever was before. So I think there is an interest in getting engaged somehow with the world.”