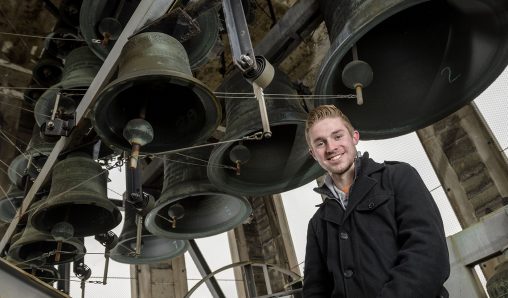 The Wright State University Newsroom met some amazing people over this past year and covered exciting events as well.

We rang in the New Year with a music major who’s bringing cheer back to the neighborhoods of Middletown, and we witnessed emotional medical students discover where they will pursue their residency training. We met an ice cream scooping business student who has a sweet spot for success and watched empowered women empower women. It was difficult, but we even caught up with Wright State’s base stealing bandit.

These are our favorite videos from the past 12 months.

Medical students from the Wright State University Boonshoft School of Medicine learned where they will spend the next three to five years of their lives completing residency training after receiving their medical degrees in May.

Wright State music student Noah Carpenter brings the carillon to life from atop a bell tower at a Middletown church.

Wright State alum Nick Moshos goes from being a bagger to the owner of Dot’s Market.

Wright State’s Creative Arts Center was transformed into a display of every type of art, from movies and music to acting and dancing for six hours on April 13.

Wright State freshmen and upperclassmen got the new academic year off to a festive start during First Weekend. The weekend was packed with many opportunities for new and returning student to learn about Wright State, get involved and have fun.

Screams of joy and excitement filled the Apollo Room of the Student Union on Sept. 9 as dozens of female students pledged to join six different sororities to wrap up the end to Wright State’s bid week.