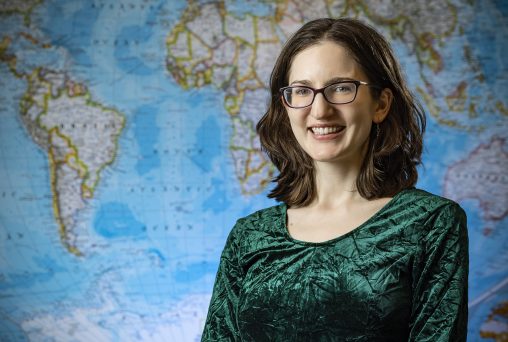 Crystal Whetstone, who earned her bachelor’s degree in political science and her master’s in international and comparative politics at Wright State, researches women’s participation in politics. (Photo by Erin Pence)

Research for her Ph.D. dissertation has taken her to Argentina and the Indian Ocean nation of Sri Lanka to examine the impact of mothers on human, political and civil rights.

In Buenos Aires, Wright State University alumna Crystal Whetstone documented the activities of Madres de Plaza de Mayo, a movement of mothers who campaigned for their children who went missing in the 1970s and ’80s during Argentina’s military dictatorship.

“They are a symbol of human rights globally,” Whetstone said of the group. “But they also mean a lot to the ongoing feminist movement in Argentina and Latin America.”

Whetstone then compared that movement with Sri Lanka’s Mothers’ Front, formed by women whose children or husbands were killed or disappeared in a 1980s civil war. The group called for an investigation into the disappearances, compensation for dependents of victims and removal of all repressive laws.

Whetstone earned her bachelor’s degree in political science and her master’s in international and comparative politics at Wright State. She is pursuing her Ph.D. at the University of Cincinnati, where she is an adjunct instructor.

In the fall, she will begin work as an assistant professor at Sam Houston State University in Huntsville, Texas, where she will teach American government and Latin America politics.

Whetstone’s Ph.D. dissertation is an outgrowth of her master’s degree work at Wright State, which examined women’s groups in Liberia during the African nation’s 14-year civil war as well as similar women peace activists in Lebanon’s civil war. She compared that group to similar groups who used their identities as mothers to become active.

For Whetstone, it’s all about finding out what impacts women’s long-term political participation.

“Crystal is a great example of a student who made the most of every opportunity at Wright State,” said December Green, chair of the School of Public and International Affairs, professor of political science and director of international studies. “She persevered to finish with a top-notch thesis, and her political science professors are all very proud of her.”

Whetstone enrolled at Wright State after graduating from Beavercreek High School in 2003. She was attracted by the university’s affordability, close location and international studies program.

“I was really interested in learning about places outside of the U.S.,” she said.

Whetstone said she loves the infrastructure at Wright State.

“The buildings at Wright State are beautiful,” she said. “It’s a really nice space where you want to be.”

While she was a student, Whetstone began working with Academy Award-winning Wright State filmmakers Julia Reichert and Steven Bognar. She conducted research on their next film “9to5: The Story of a Movement,” which is scheduled to debut in March at the SXSW Film Festival in Austin, Texas. The documentary chronicles a group of female office workers in Boston in the early 1970s who organized to force changes in their workplaces because of low pay and lack of opportunities for advancement. The social movement led to the creation in 1973 of the National Association of Working Women, which is dedicated to improving working conditions and ensuring the rights of women and families.

“We did some archival research in Massachusetts,” Whetstone recalled. “I met all of these amazing people from the historical movement that the film is about. We hung out with the organizers and the activists and just heard their stories. It was a great experience.”

“We examine how a Third World strategy that brings in the Fourth World — or indigenous, minority and/or stateless groups — can help oppressed groups gain more autonomy and rights through a transnational solidarity rooted in empathy,” she said.

Whetstone is eager to begin teaching at Sam Houston State.

Whetstone says she is grateful for her liberal arts degree, which gives people the writing and analytical skills so much in demand by employers today.

“One of the things I’m always concerned about is people being active citizens,” she said. “If you have a liberal arts background you have a broader understanding of how the system works and what kind of ethical and moral things we should be valuing as a society. So I think it prepares you to be a really informed voter because you get a nice broad education.”