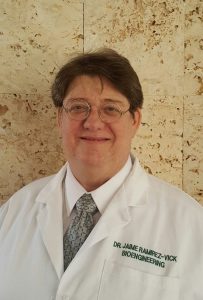 Jaime E. Ramirez-Vick, professor of biomedical engineering in the College of Engineering and Computer Science.

Jaime E. Ramirez-Vick, professor of biomedical engineering at Wright State University, was elected a Fellow to the American Institute for Medical and Biological Engineering (AIMBE) for his work in genetic diagnostics.

Election to the AIMBE College of Fellows is among the highest professional distinctions accorded to a medical and biological engineer.

Ramirez-Vick was nominated, reviewed and elected by peers and members of the College of Fellows for “his leadership in the growth and technological advances of genetic diagnostics and contributions to academia-industry collaboration and bioengineering education,” the institute said.

He was remotely inducted along with 156 colleagues who make up the AIMBE College of Fellows Class of 2020. The honor was announced on March 30.

Ramirez-Vick’s research interests include nanomedicine in the development of multifunctional nanostructures for cancer detection and treatment, the role of mesenchymal stem cells (MSCs) in metastasis and macrophage modulation during inflammation for ischemic and chronic wound tissue regeneration.

They also include regenerative medicine using MSCs in the development of biomimetic 3D scaffolds and the study of their differentiation using biophysical stimulation, and electrochemical nanostructured biosensors for protein and nucleic acid cancer biomarker detection.

Ramirez-Vick has graduate and undergraduate degrees in chemical engineering from the University of Puerto Rico–Mayaguez and Arizona State University, with postdoctoral training at the Lawrence Berkeley National Laboratory and the Cancer Center of the University of California–San Francisco.

He is co-founder of Iris Biotechnologies and Daedalus Biotechnologies, two microarray-based diagnostic companies in northern California. As technical lead of the companies, he has been awarded 17 patents for their core technologies.

Ramirez-Vick is a member of the editorial board of 10 peer-reviewed journals and is ad hoc editor in 16 others. He co-authored a textbook titled “Bioseparation Process Science.”