When asked what playing the violin and bagging groceries have in common, Katie West doesn’t hesitate for even a beat. “Rhythm and focus,” she says.

The Wright State University violin student should know. She finished as runner-up in a national grocery bagging competition using a skill she sharpened working at Dorothy Lane Market in Oakwood. A banner over the store entrance congratulates West.

“She is phenomenally fast,” said store director Jerry Post. “The emcee of the event called her an Avenger. It was like watching somebody out of a comic book.”

Dorothy Lane Market has taken extensive measures to protect the safety and health of its customers and staff in the wake of the coronavirus. In addition to its employees wearing face coverings, the store asks customers to do the same if they can. The market also sanitizes carts and other hard surfaces, limits the number of customers in its stores at any given time, has put markings on its floors to aid physical distancing and has suspended its culinary classes and the consumption of alcohol.

West’s love affair with the violin began when she found one in her grandfather’s closet. She began studying violin in middle school after taking part in an exploratory music program that introduced her to other instruments.

She found that the violin enabled her to connect to the music at a deep level. “It’s a very expressive instrument,” she said. 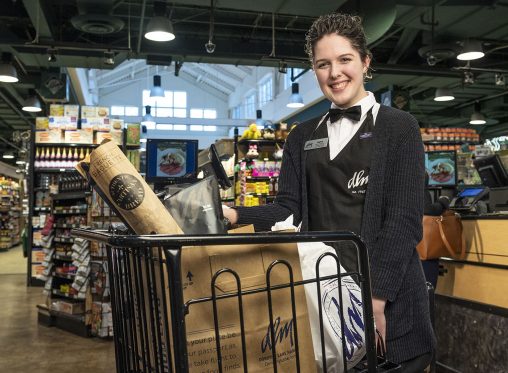 Katie West, who majors in violin performance and music education and works at Dorothy Lane Market, was runner-up in a national grocery bagging competition. (Video by Kris Sproles / photos by Erin Pence)

After graduating from Kettering Fairmont High School in 2019, West enrolled at Wright State to study violin and music education. Her parents, who are retired math teachers, and two of her siblings all went to Wright State. Her twin brother will transfer to Wright State in the fall.

Just in her first year, West has already had teaching experiences and attended educational workshops, some in Indianapolis.

“There is so much I’ve already been offered with these amazing opportunities at Wright State,” she said.

West grew up two blocks from Dorothy Lane Market and began working there in 2016.

“This has been a really safe and humbling job to have through high school,” she said, “and I should be able to continue it through college to help pay for my college working here and saving money.”

West started as a bagger and is now assistant for the day, serving as a front-end supervisor and taking over for the manager when necessary. But she still bags groceries from time to time.

West said the secret to being a good bagger is having good organizational skills and techniques.

She said the biggest challenge of being a bagger is keeping up with the flow. She said her most embarrassing moment was dropping and shattering a customer’s bottle of wine.

“You want to go as fast and efficient as possible,” she said. “And efficient is way better than being fast because you want to make sure you handle these customers’ items with care because their last experience is with you as they leave.”

Every year, Dorothy Lane Market holds a bagging competition among its employees at its three Dayton-area stores for fun. As part of that, West and a few fellow employees would get together and practice speed-bagging.

The top four finishers this year, who included West, competed in a statewide bagging contest last August in Newcomerstown hosted by the Ohio Grocery Association. Baggers had 50 seconds to put groceries into three bags and were rewarded with points for speed, proper technique, weight distribution in the bag, as well as style, attitude and appearance.

West advanced from the first heat even though she forgot to bag a beef stick, an oversight she felt had doomed her. But she finished first among the five finalists and advanced to the national Best Bagger Championship hosted by the National Grocers Association in San Diego in February.

There were 700 spectators cheering on the 22 competitors. There was also a big stage, bright lights and emcee Akbar Gbajabiamila, co-host of “American Ninja Warrior.”

“It was a lot more intense than the hometown feel of the Ohio competition,” said West. “It was a very big production.” 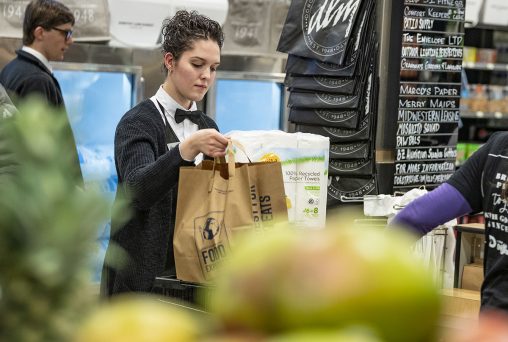 In her first year studying in the Wright State School of Music, Katie West has had teaching experiences and attended educational workshops, some in Indianapolis.

West finished first in the first heat and competed against four other baggers in the final round. When the dust settled, West had finished second, runner-up to a bagger from Maine.

West said she never expected to finish that high and was just excited to have the opportunity and be runner-up. She plans to use her $5,000 cash prize to pay tuition at Wright State.

Post said West has a sunny disposition, a smile that lights up a room and a “nervous confidence” in stressful situations. He said she embodies the professionalism Dorothy Lane tries to instill in its young workers.

“I’m excited for her. She deserves this,” said Post. “She’s one of the greatest employees I’ve ever been around.”