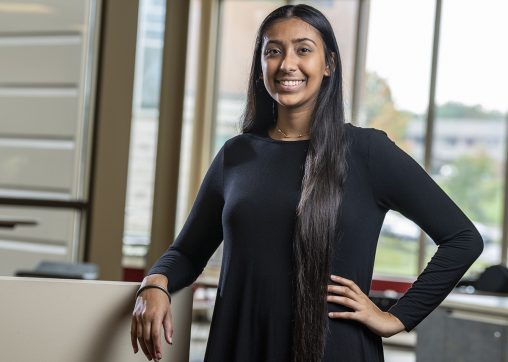 Jugad Mattu will work for AmeriCorps as she nears her bachelor’s degree in business at Wright State University. (Photos by Erin Pence)

She’s all business when it comes to business. Jugad Mattu’s interest was fueled by her family, who owns two Indian restaurants. That passion has opened some unexpected doors for the Wright State University senior, leading her to Spain and now AmeriCorps.

Mattu, president of the International Business Club, is scheduled to graduate in December with a bachelor’s degree in business and a legal studies certificate. And she has a job coming up with AmeriCorps, a civil society program that engages its volunteers in public service work to help others and meet critical needs in communities.

Mattu will serve with AmeriCorps NCCC, a full-time, residential team-based program for young adults who travel the country and complete hands-on projects. She will be based in Iowa but will work all over the northern United States.

“I am excited to immerse myself into a dynamic environment that will force me to adapt and change at the drop of a hat,” she said. “I’m nervous because of the unknown, but I have heard great things about the program and the staff. I’m looking forward to creating new memories while doing meaningful work.”

Mattu grew up in Beavercreek. Her father and his brother own the Jeet India and Amar India restaurants. She enrolled at Wright State after graduating from Beavercreek High School in 2016.

“What brought me to Wright State was the affordable tuition, but what made me stay was the people,” she said. “I have developed meaningful relationships with faculty and have met some of the most intelligent and well-meaning professors.”

Mattu initially majored in engineering but switched to business, which she realized was her passion.

“Growing up, I watched my father handle his business like a pro, and I wanted to be just like him,” she said. “The Raj Soin College of Business gave me an opportunity to learn from the best and be surrounded by a competitive yet supportive environment.”

Mattu said the International Business Program has given her skills in almost every field of business, including finance, marketing and management.

“International business drew me in because I was given the chance to explore and learn from every facet of the business world on a domestic and global scale,” she said.

Mattu said the support she has received at Wright State has given her the confidence to succeed professionally.

“Whenever I have felt unsure about myself or my future, my school has always been behind me,” she said. “My professors have pushed me to be my best and they’ve always made sure that I’m the most successful I can be.” 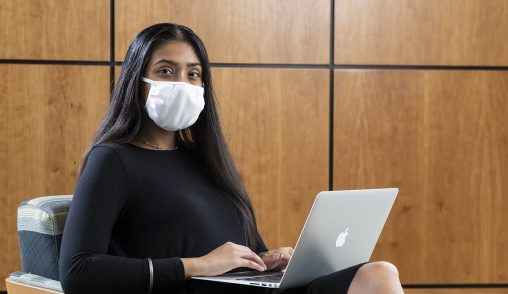 Jugad Mattu said the support she has received at Wright State has given her the confidence to succeed professionally.

“Jugad is an outstanding student leader,” said David Bright, chair of the Department of Management and International Business. “She is driven and passionate about making a positive difference in the world. I expect to see great things from her in the future.”

Last spring, Mattu went to Spain as part of a study abroad program connected to her international business major. The program was based in Barcelona, but she was traveled to Portugal, Morocco, Italy, England and Switzerland, where she did some skydiving.

Mattu said studying abroad taught her to not take life too seriously and to be more carefree.

“Coming home from Barcelona, I reflected on how before study abroad I thought everything in my world was a ‘make-it-or-break-it’ situation. But life is so much more forgiving than that,” she said. “I began to let go of expectations and just live in the moment. I began to appreciate the simpler things.”

Mattu’s interest in AmeriCorps was sparked when she was in Morocco and met a tour guide who served with the Peace Corps for two years in small business development.

“She talked about her experience in working with underserved communities in Morocco,” Mattu said. “I saw how passionate she was, and from there the seed was planted. I began my research and decided that AmeriCorps was the path for me.”

Mattu hopes to earn her master’s degree in international studies/relations. Her ultimate goal is to work at the United Nations and travel more of the world.