How Wright State faculty, staff, and students have adjusted to remote delivery of classes 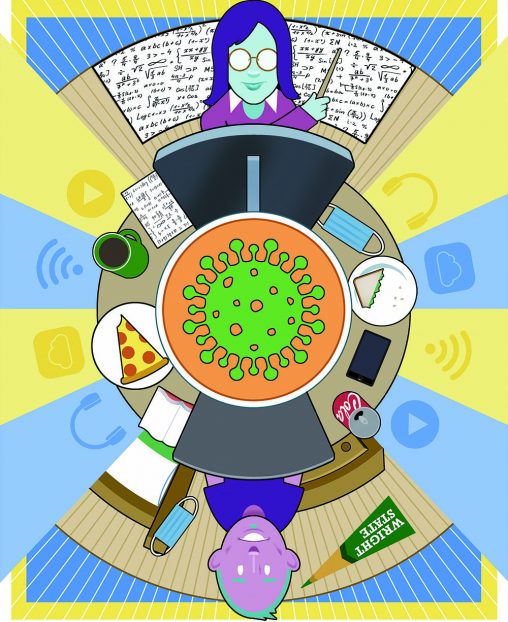 It wasn’t easy. When Wright State University had to suspend in-person classes in March to help limit the spread of coronavirus, faculty, staff, and students had to face how they were going to teach, learn, and work remotely.

Coming to the rescue were the university’s Computing and Telecommunications Services (CaTS) and the Center for Teaching and Learning (CTL), superheroes in laying out a roadmap for online learning. After that, faculty used their creative instincts to carry the ball.

Their online initiatives included playing “walk-up music” prior to class lectures and producing a virtual saxophone choir. There was also a virtual crime-scene exercise, lessons on making protective masks, and even using a video-gaming platform to keep students connected.

Cassidy Elliott, a senior nursing student, was sitting in her last class of the day on March 13 when she got the email. Everyone in her class got it—the announcement that all Wright State classes were moving online due to the COVID-19 pandemic.

“The class went into frenzy, asking questions and panicking,” she said. “I just tried to stay calm, knowing that there was nothing I could do to change the situation.”

Similarly, Sonja Wolf, an international graduate student from Germany in the last semester of her M.B.A. program, was worried when she heard the plans. Her first worry was that she would be forced to return to Germany, but was able to finish her degree.

“By being an international graduate student, you are required to take one face-to-face class each semester,” she said. “I wasn’t sure in the beginning if I would be allowed to take all of my classes online or what that would mean.”

Wolf’s classes shifted to remote learning with relative ease, and her classes carried on as normal and on schedule. However, she said the most difficult transition she had to face was conducting group projects and handling the normal group work her classes included.

“It was hard to find time with two to four other team members with everything that was going on,” she said. “It was different communicating with team members more via email or video.”

Elliott agreed that while she was able to handle the workload of remote classes, she missed the hands-on aspect of many of her nursing classes, especially when it came to her clinicals. She said the hardest thing was missing out on the in-person training she was expecting.

“I was very excited for the experience I was to gain from Dayton Children’s Hospital, and unfortunately was unable to attend,” she said. “I think it is a necessity they are done in person in order to get the adequate experience needed for my field.”

Wolf said that many of her fellow M.B.A. students were also working full time and were struggling with how they were going to be able to work from home full time and attend classes remotely. But, she said, her professors were trying to be as accommodating as possible by making curriculum modifications and extending project deadlines.

“Our professors were very understanding and did make slight modifications to certain projects to allow for more time,” Wolf said. “The M.B.A. program already has many online sections, so I had been taking many online [classes] already. I think, in some way, M.B.A. students were better off.” 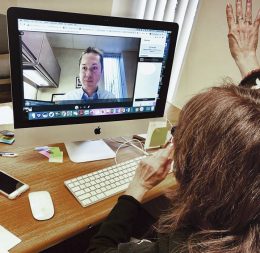 Likewise, Elliott cited how empathetic her professors were, especially when she informed them that she lived in a rural area with limited connectivity and Wi-Fi access. She said this caused increased anxiety, especially when she lost her internet connection in the middle of a final exam later in the semester.

“The transition definitely took some adjusting,” Elliott said. “Thankfully I had professors who understood our circumstances and were willing to help us in any way they could.”

Just as Wright State students had to suddenly shift how they attended classes and absorbed information in a new, virtual format, seemingly overnight, many faculty members had to take a crash course in the remote delivery of courses.

A forensic anthropology class that usually had students outside combing through staged evidence and replicas of human remains was transformed into a virtual experience.

Amelia Hubbard, associate professor of anthropology, held her forensic simulation exercise virtually, recreating the scene with photographs and video and then having her students analyze the remains in a virtual lab.

The scenario involved someone walking through the woods at Wright State and finding a leg in a tennis shoe. The students were tasked with finding the rest of the body, which they did in a decomposing log.

“The simulation allows them to practice what they’ve been learning,” said Hubbard, “and it definitely challenges them to see an experience even if these aren’t real forensic cases.”

She said the simulation creates the emotion and stress the students would experience at a real crime scene. They have to work carefully, but quickly, and learn how to document everything. Once they go back to the lab, they have to do a biological profile, analyze trauma patterns. and investigate possible DNA.

“It’s almost like an interactive final exam,” she said. 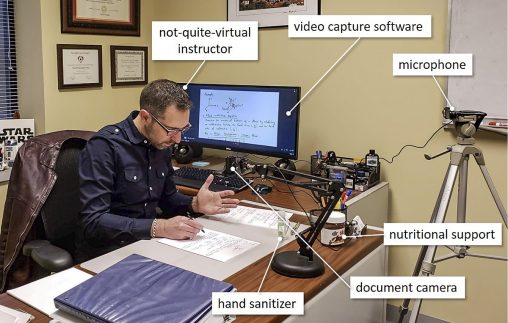 Jim Greenspan, professor and chair of the Department of Accountancy, played walk-up music to start classes on his remote broadcasts.

Music professor Shelley Jagow, interim director of bands, made a click track—a series of audio cues used to synchronize sound recordings—and sent it to her saxophone students along with a specified part they were to learn.

“They were each to submit a video playing a Bach Prelude and Fugue to the click tracks, and then I layered them together to create a full saxophone choir,” she said.

Jagow also set up a virtual master class with her students and a Wright State alum currently teaching at the Las Vegas Academy for the Arts.

Bobby Rubin, senior lecturer and director of the English as a Second Language Program, has always created Facebook groups for his classes.

“But it has really come in handy now because it serves as a quick and easy way for my students and I to be in contact with each other,” said Rubin. “Of course, I’m using Pilot and it’s working well. But because Facebook is so ubiquitous, many students are there anyway.”

He said it has resulted in very good class discussions.

“And with just one click they can be in touch with me on Messenger,” said Rubin. “It’s serving as a very quick and easy means of both communicating and in having class discussions.”

Bud Baker, professor of management, sent news-related emails to his students three or four times a week, analyzing such things as the famous “Internet Tidal Wave” memo from Bill Gates in 1995 and one from Amazon CEO Jeff Bezos exhorting his workers to keep the faith that they will be successful even against long odds.

“This is perhaps the most fundamental role of the strategic leader—to sense the future and to prepare his or her people for it,” said Baker. “Usually the vision is an appealing one, but sometimes it can only be honest and frank.”

Accountancy instructor Barry Holland recorded individualized, 90-second videos and sent them to each of his students.

“I’m trying to make sure they know I’m thinking of them and encouraging them to remain fully engaged with our class,” he said. 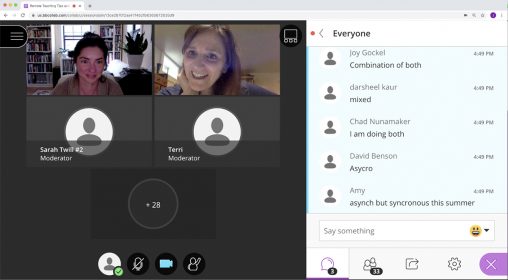 CTL hosted a webinar on remote teaching tips for faculty.

“We noticed what we call ‘hallway discussions’—before class, after class, students communicating with other students,” said Matt Kijowski, cyber systems program manager. “We needed something that was primarily student-driven.”

So Kijowski and the department decided to try using Discord in addition to the conventional online classes.

Discord is a free computer software and digital distribution platform designed for video gaming communities. It specializes in text, image, video, and audio communication between users in a chat channel. It was instantly popular with the students.

“It blew up overnight,” said Kijowski. “Students really wanted the ability to communicate with one another if they had frustrations, if they had fears. They just wanted to chat.”

So Kijowski and his team began to beef up the Discord channel, adding a welcome window, tech support, and channels for students to chat individually with faculty and teaching assistants. 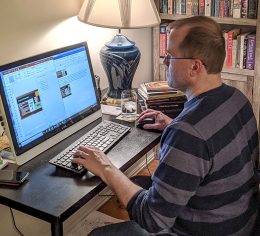 Ian M. Mahaffy, a senior computer science student from Dayton, said he used Discord to connect with fellow students on everything from classwork to conversations unrelated to class.

“I wish it hadn’t taken a pandemic for this to take off, as having a service like Discord is incredibly useful for students regardless of the distance learning we are currently working in,” said Mahaffy. “I would like to see this stay around in some capacity, even after things go back to normal.”