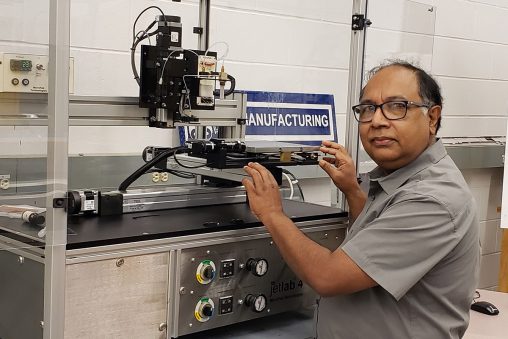 Ahsan Mian is an associate professor of mechanical and materials engineering in the College of Engineering and Computer Science.

Ahsan Mian, associate professor of mechanical and materials engineering in the Wright State University College of Engineering and Computer Science, has been elected a Fellow of the American Society of Mechanical Engineers (ASME).

The prestigious honor was awarded for Mian’s significant contributions in applied mechanics and electronic packaging materials.

“The Fellow grade is truly a distinction among ASME members,” Thomas Costabile, ASME’s executive director and CEO, wrote in a letter to Mian. ASME is a professional association that promotes the art, science and practice of multidisciplinary engineering and allied sciences around the globe. It has more than 85,000 members.

Mian was nominated for developing novel sensor systems using nontraditional materials. He was the first to develop a highly sensitive stress sensor based on a van der Pauw structure to measure stresses on the surface of a semiconductor chip. And using printed wiring boards, he developed a novel engine control packaging platform for under-hood electronics.

Mian was also lauded for his strong leadership and outstanding record of service.

Mian joined the faculty at Wright State in 2013. His current research focuses on additively manufactured (3D/2D printed) multifunctional structures. Mian’s research has been funded by the National Science Foundation, NASA, the Department of Defense and industry. He has advised 20 Ph.D. and master’s degree students to completion and has co-authored over 140 technical publications and presentations.