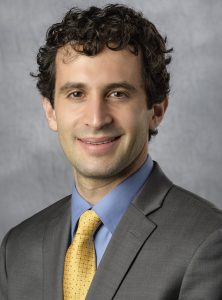 Daniel Warshawsky, associate professor of geography and director of the Master of Public Administration Program.

The World Food Programme winning the Nobel Peace Prize is a recognition of the work the organization has been doing in conflict regions and a recognition of the catastrophic impact the pandemic has had on food insecurity globally, said a Wright State University expert on hunger and food security.

“In this way, the award is a sobering reminder of the year 2020 and the food insecurity challenges that have come with the COVID-19 pandemic,” said Daniel Warshawsky, associate professor of geography and director of the Master of Public Administration Program in the School of Public and International Affairs.

The World Food Programme, the food assistance branch of the United Nations, was created in 1961 and today provides food to over 100 million people a year.

Warshawsky said the pandemic has resulted in the rise in global poverty and food insecurity as well as the destruction of many informal livelihoods and employment opportunities for people around the world. He said the negative impacts on food insecurity and household income may be felt for many years.

“While some governments have provided needed support for the food insecure and unemployed, the patchwork of government food and income relief programs and the nonprofit food charity network have been overwhelmed and insufficient to cope with the rapid and widespread increase in food insecurity globally,” he said.

“The average person can give money or food to food assistance programs or participate in the political system or social movements to promote the basic human right-to-food or government food programs,” he said.

His research focuses on food access and food waste in cities. He has analyzed urban food systems in North America and Africa. The results of his studies have been published in The Professional Geographer, Urban Geography, Geoforum, Social and Cultural Geography, The Geographical Journal, Geography Compass, Cities, Sustainability, Journal of Southern African Studies and African Geographical Review.

Warshawsky is working on a long-term research project on the globalization of food banking. He is analyzing the structure and outcomes of food bank development and the roles that food banks play in reducing food insecurity and food waste.

He has signed an advanced book contract with the University of Iowa Press as part of its Food and Agriculture Book Series. The book is tentatively entitled “Food Waste, Food Insecurity, and the Globalization of Food Banks in the World’s Cities.”

Warshawsky, who has a Ph.D. in geography, received the 2020 Helen Ruth Aspaas SAGE Innovator Award, a prestigious national geography honor. At Wright State, he teaches courses in geography and public administration.