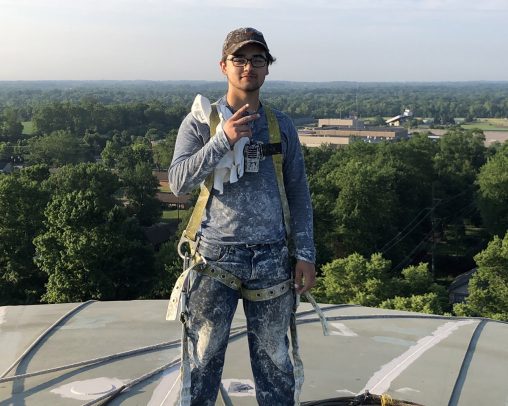 For most of us, the thought of painting a water tower can be summed up in one word — terrifying.

But painting and rehabilitating water towers is a passion for Ronnie Boling. And reaching great heights academically is also happening for the Wright State University accountancy major.

When Boling isn’t suspended up to 16 stories off the ground sandblasting and using extended rollers to coat water towers with paint, while hoping for no unexpected gusts of wind, he’s online watching recordings of his business classes.

The sophomore carries a perfect 4.0 grade point average and recently posted perfect 100s on two economics exams, the only student to do so.

Boling began painting water towers when he turned 18 and has painted three so far, in Centerville, Xenia and at Wright-Patterson Air Force Base. It takes up to three months to complete one.

“The hardest part is constantly having to deal with the weather,” he said. “The weather plays a huge role in this line of work, and oftentimes unsatisfactory weather will drag out a job.”

Before the COVID-19 pandemic, Boling worked on local water towers so he could attend classes in person. After his classes went remote, he took advantage of that change and began working out of state. Most recently, Boling’s job has taken him to Lexington, Kentucky, where he worked with a crew of eight to paint and rehabilitate a pump station that supplies water to the city.

Boling typically works about 11 hours a day, six days a week. For the Lexington job, he returned to his home in Ohio on Saturday evenings, woke up early on Sundays to complete work on some of his self-paced classes and went back to Lexington early Monday morning.

“This type of work is inherently dangerous, and even though I abide by all safety regulations and take precautions there will always be some level of danger,” he said. “I am thankful to not have been in any close calls or scary moments beyond those that come with the job.”

Boling said Wright State is preparing him to deal with a heavy workload and work well under pressure. He says there is no real secret to his academic success.

“I am just determined to achieve my goals and am doing so through hard work and diligence,” he said. “My best advice for others would be to set your mind on a main goal that you wish to achieve and always keep it in the back of your mind as you study. I find it a lot easier to study hard when I remember what I am working to achieve.”

Boling was one of 36 students in a fall remote micro economics class taught by Berkwood Farmer, associate professor of economics who served as dean of the Raj Soin College of Business from 2001 to 2013.

“I have taught many students — including undergraduates and graduates at other universities — and it is a personal pleasure to teach intelligent and dedicated students like Ronnie,” said Farmer. “I am really impressed with his analysis and organization of answers on discussion questions on exams, far above what I would expect from the very best students.”

Boling grew up in Medway, where his father runs a business that paints and rehabilitates water towers. After graduating from Tecumseh High School as valedictorian in 2019, Boling attended The Ohio State University for a semester, then transferred to Wright State.

“I wanted to be able to go to school, but also be able to continue to work on water towers because I hope to one day have my own water tower painting business,” he said. “Wright State is close to home and has a good business program, so I decided that it would be a good choice.”

Boling had taken an interest in accountancy in high school and then decided to pursue an accountancy degree at Wright State because he felt it could help him as an entrepreneur.

“I’ve been around this work since I was a little kid, and it’s always been a dream of mine to have my own business doing it,” he said.

Boling seems to have an affinity for steel. In his free time, he uses a welding machine to produce various metal-working creations.