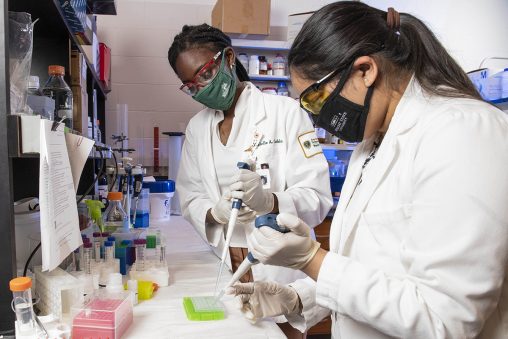 Danielle Corbin, left, a dual-degree M.D.-M.S. student, and Lea Christian, a graduate pharmacology and toxicology student, are involved in a Boonshoft School of Medicine research project to study the effects of sunlight on the body.

A super sunscreen for people hypersensitive to the searing rays of the sun could be the end result of research at Wright State University thanks to a $1.7 million grant from the National Institutes of Health.

“This grant is designed to try to understand how UVB radiation — the burning rays of sunlight — can signal in the body,” said Travers. “And we are particularly interested in photosensitivity — how some people have exaggerated responses to sunlight. One of the areas involves clinically testing a drug to see if it can block these exaggerated effects.”

The research, which involves studies in cells and human subjects, is titled “UVB radiation-generated microvesicle particles as effectors for photosensitivity.”

“We believe we have identified a novel pathway that is disturbed in people with sun sensitivity,” Travers said. “When they are stressed, cells will release little parts of themselves called microvesicle particles from the plasma membrane.”

Chen is an expert in this area of subcellular particles. Travers is a clinical dermatologist and an expert on photobiology.

The researchers’ previous work has shown that the burning rays of sunlight cause these microvesicles to be released from the skin and travel all over the body.

“Importantly, we have also found a drug that is already in use for other disorders that if given topically as a cream can block both the microvesicle particles and the abnormal UVB responses in cells/mice,” said Travers. “Hence, we could end up with an ‘uber-sunscreen’ that would be useful for those with sun sensitivity.”

According to the Skin Cancer Foundation, one in five Americans will develop skin cancer by the age of 70, with more than two people in the United States dying of skin cancer every hour. Having five or more sunburns doubles a person’s risk for melanoma, the foundations says, but when detected early the five-year survival rate for melanoma is 99%.

A virtual village of scientists and clinicians at Wright State and the Dayton community have worked together on the research.

In addition, clinical dermatologists Craig Rohan and Julian Trevino are involved in the human studies being conducted at the Wright State Physicians Pharmacology Translational Unit. Michael Johnson, professor and chair of the Department of Orthopaedic and Plastic Surgery, is also helping with the studies.

Eight dermatologists and rheumatologists in the area have agreed to send their patients with clinical sun sensitivity to be tested to see if localized UVB treatment to their skin will result in increased microvesicles and if topical application of microvesicle blocking agent affects their UVB responses.

Madhavi Kadakia, associate dean for research and chair of the Department of Biochemistry and Molecular Biology, assisted in the proposal and is involved in oversight of the project.